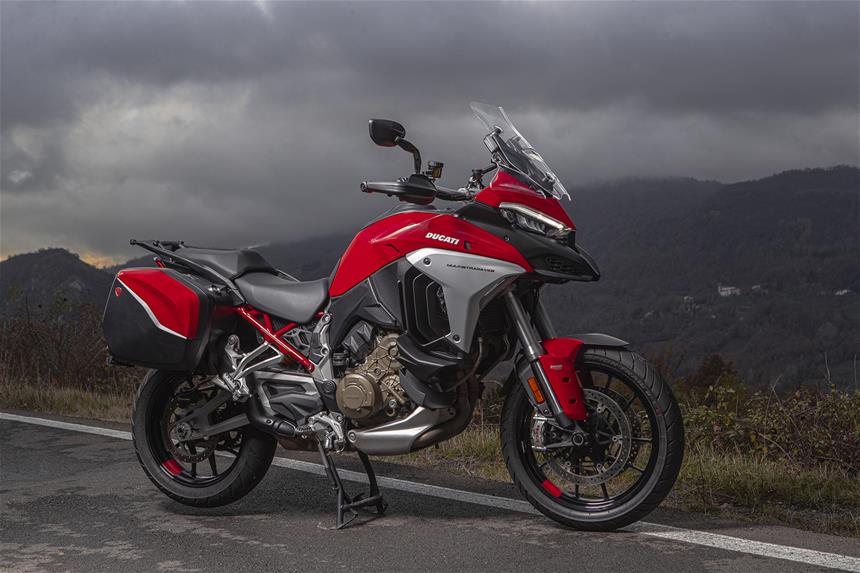 Cards on the table time, the Ducati Multistrada 1200 is one of my favourite bikes ever.

Since it was reinvented in 2021, I’ve run three of them over the years, tested dozens, done big trips on them, commuted, spanked sports bikes on track days on them and ridden them off-road, especially the Multistrada 1200 Enduro, which if money was no object, I’d have in my garage this afternoon.

I love the practicality of a big touring bike that’s made to look like an adventure bike, the madness of the previous generation’s 160bhp motor on something so tall and gangly, and the idea that one bike can really be four bikes in one - even if the standard Multistrada was never really very good off-road. So even if it was more like three bikes in one – Sport, Touring and Urban – I’ll take that!

And I’m not the only one. Ducati has sold an impressive 100,000 Multistradas in their various guises since the first one in 2003.

But, they all had V-twin engines. And for 2021 the thought of a big lump of V4 ‘Granturismo’ motor in an all-new Multistrada frame scared me. Had they ruined one of my favourite bikes of all time? The new bike features that all-new 1158cc, 170bhp V4 engine housed in a new monocoque aluminium frame, just like the technology originally used on the Ducati MotoGP bikes, then handed down to the Panigale V4 and Streetfighter V4, before making its debut on the Multistrada V4S this year. 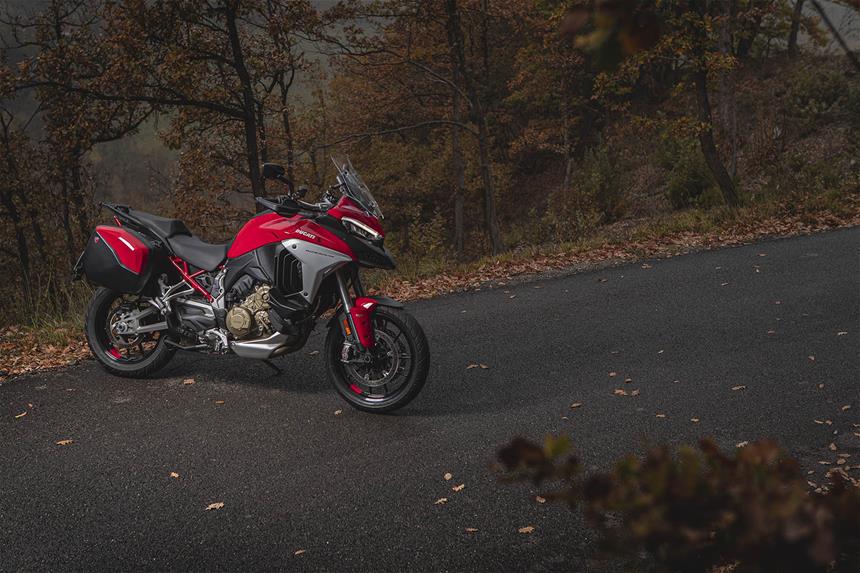 Some have said it should be Desmodromic, as it’s the first Ducati since 1978 that isn’t. The switch from Desmodromically operated valve gear to more conventional springs means that the Multistrada has significantly increased its major service intervals. Previously the Desmo service was due between 15-18,000 miles but on the V4S, the first valve service is at 36,000 miles. The Ducatisti purists might care, but nobody else will. Just ride it.

So, have they ruined one of my favourite bikes? Not a chance. I couldn’t have been more wrong.

The new motor is ridiculously smooth and almost makes you miss the clattering of the old V-twin at town speeds. The thrust is effortless, and it has a beautiful intake roar that makes it feel like a real Ducati when you approach the 10,500rpm redline.

My own feeling is that it maybe lacks a tiny bit of grunt at very low revs because of the nature of a V4 versus a V-twin, but it’s a tiny thing in what is an absolutely magnificent motorcycle.

Everywhere else the V4 motor never leaves you wanting. It makes pace so rapidly across country that you feel like you never need to put too much effort in.

The suspension set-up is sporty as standard setting (though you can adjust it to feel how you want), and the new 19” front wheel puts it more in BMW R1250GS territory, but if anything, it makes the Ducati feel even more surefooted on cold, greasy roads. And because of the new frame it actually feels like it turns quicker.

When BMW first released the S1000XR I thought it was the bike I always wanted, until I rode it. Sadly the first bike was just a bit too buzzy and frenetic.

The Multistrada V4S is the Ducati I’ve been waiting for. 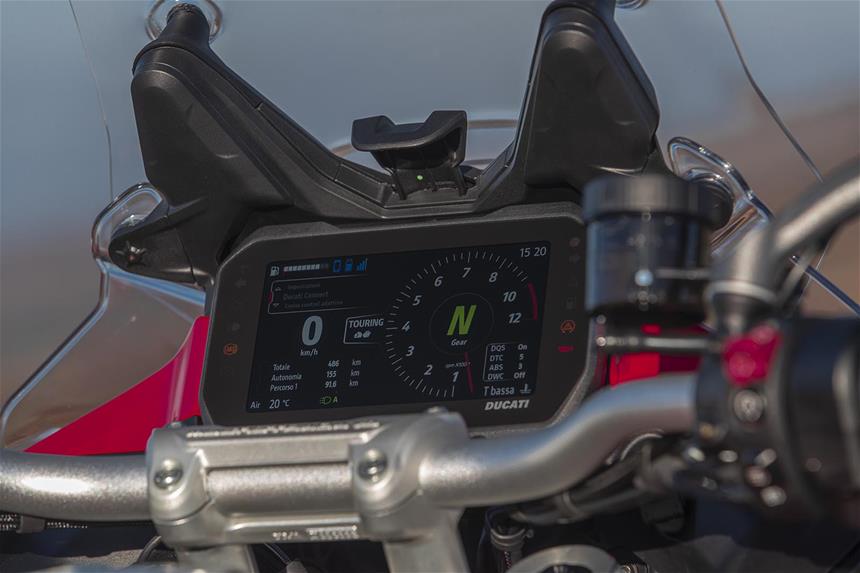 Fast and ridiculously comfortable, there’s not much it can’t do. The Multistrada V4S is the ultimate motorcycle for those who love gadgets, too. It looks, ride, and even smells like a Multistrada! Tank range on our test was 185 miles, and comfort was never an issue for me.

Forgive it the ridiculous (and surely unnecessary) strakes and fins that are meant to improve downforce and stop the front wheel lifting at speed, and underneath it’s the Multi’s cheeky beak face as we know and love, just redefined.

Equipment-wise there’s nothing it doesn’t have, as you’d expect for a flagship Ducati model. The version we tested also comes with the Travel and Radar Pack which means panniers, centre stand and radar cruise control. Add in a stunning MotoGP looky-likey optional Akrapovic silencer and you’re on your way to £22,000 for this bike as you see here. The ‘cheapest’ Ducati Multistrada V4S comes in at £19,995. The ‘base’ V4 starts at £15,495 and does without the S model’s fancy electronic suspension as well as some of the other bells and whistles.

One of the features of the S is the radar cruise control, which is ace and very similar to the system fitted to VW cars and vans. On motorways it’s very relaxing. It identifies the vehicle in front of you on cruise control and keeps you a safe distance behind it, adjusting speed and distance to the vehicle in front. If the car in front brakes suddenly, so will the bike. It’s not my favourite must-have gadget on cars or bikes, as it breaks my flow when riding, but some people will enjoy it on longer trips. And as for the brakes, they have touring pads fitted and are more than up to the job, even if they don’t have the out and out stopping power you will get on a Panigale V4S. But then the superbike doesn’t weigh 243kg wet either.

Despite that, the weight is carried low, and it feels well balanced in town. I’m a big guy at six feet four inches, so the seat height (adjustable between 840mm and 860mm) was no issue for me. Ducati also sell accessory heated seats that are both higher and lower than standard, either increasing the height by 15mm, or reducing it by 30mm.

As standard, the V4S gets Skyhook electronic suspension which can be adjusted any which way you choose depending on personal preference, or automatically by selecting one of the four riding modes. There’s adjustable wheelie control, power modes, traction control, a lap timer, an up and down quick-shifter, cornering ABS, cornering lights, hill hold heated grips, in-built navigation through a phone linked to an app by Bluetooth, an adjustable screen you can lift with your left hand when you get on faster roads, and even, a heated seat for rider and pillion. I’m surprised an Italian team of technicians doesn’t appear from under the seat to wash it for you after every ride. It really is that well equipped. 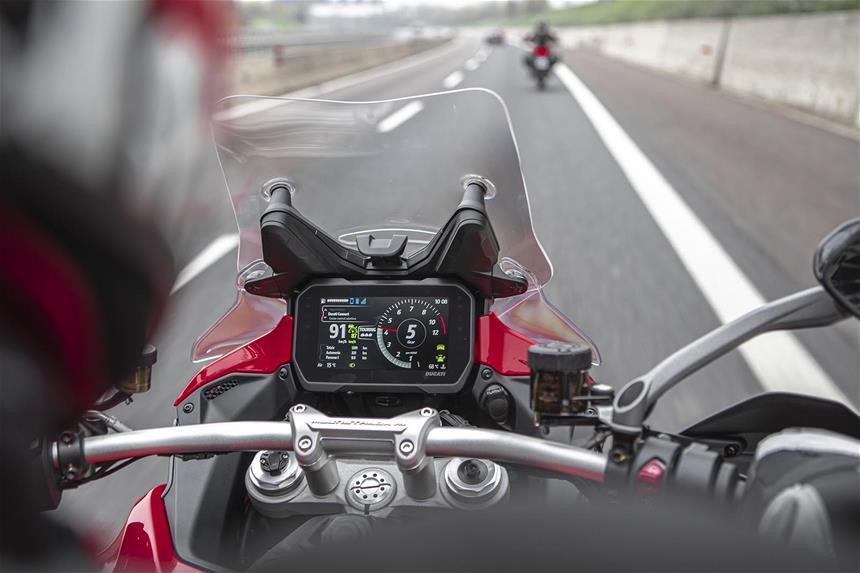 All of this is controlled by a new joystick feature on the left handlebar which looks complicated when you first lay your eyes on the 6.5-inch TFT full colour dash but is really easy to use on the move. After a few miles I was in control of its myriad of settings.

By shifting the focus of the Multistrada slightly Ducati has inevitable moved it even closer to the BMW R1250GS. Despite the Ducati having a 35bhp power advantage they both make progress in a similar way, and if anything, the BMW feels more playful, and it’s a fair bit cheaper too. But, if you want the ultimate cross-country motorcycle that you can tour on, commute with, do a track day on, or take in a continental tour, there’s nothing that does it in such a capable and luxurious was as the Ducati Multistrada V4S. Ducati hasn’t just improved the Multistrada, they have made it magnificent.