While turbo and supercharging has been an important part of motor car engineering for over 40 years, forced induction has been a very small niche in motorcycling.

A brief craze for turbocharging motorbikes took place in the 1980s, and while turbos have become commonplace in everything from the humblest supermini to the most extreme supercar, in the bike world they’ve pretty much remained the domain of those custom builders who indulge in the most outlandish modifications.

That may change in the near future though, as motorcycle manufacturers look at ways in which to increase the efficiency of their next generation bikes. Low pressure turbos have become the norm on small cars, allowing for smaller, cleaner and more fuel efficient engines, and there’s a good chance that bikes will follow suit as they gear up for the next round of Euro5 emissions regulations.

But what of the forebearers? Only a handful of turbo charged motorcycles made it into production. Here’s our look back at them… 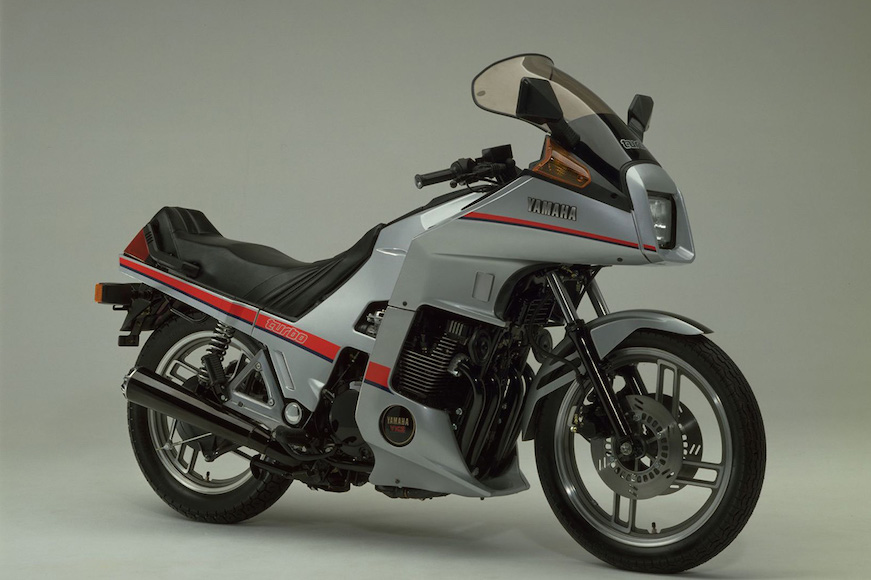 The early 1980s were a decadent time and nowhere was that more visible than in the automotive world.

Formula One racing was at the start of an era of big boost, big winged, race cars and on the road, the Porsche 911 Turbo led a slew of glamourous turbocharged sportscars.

Hardly surprising then that bike manufacturers would get in on the act. What was more surprising was the models they were attached to.

Yamaha were the first to bring their turbo to market, in 1982. The bike chosen to get the turbo treatment was the XJ650, a mildly sporting four-cylinder middleweight.

Yamaha gave the XJ a futuristic (think Street Hawk/Silver Dream Racer) makeover with a silver fairing, and angular tank/seat unit, and gave the engine a power boost from around 73bhp for the naturally aspirated version, to 90bhp for the blown unit, a figure not far short of the XS1100 of the same era.

Known as the Seca in America, the XJ650 Turbo was only in the Yamaha range for a few years. Perhaps it was due to the high costs, the peakier power delivery or the fact that bikers are generally a conservative bunch when it comes to new technology, but turbos never really took off. 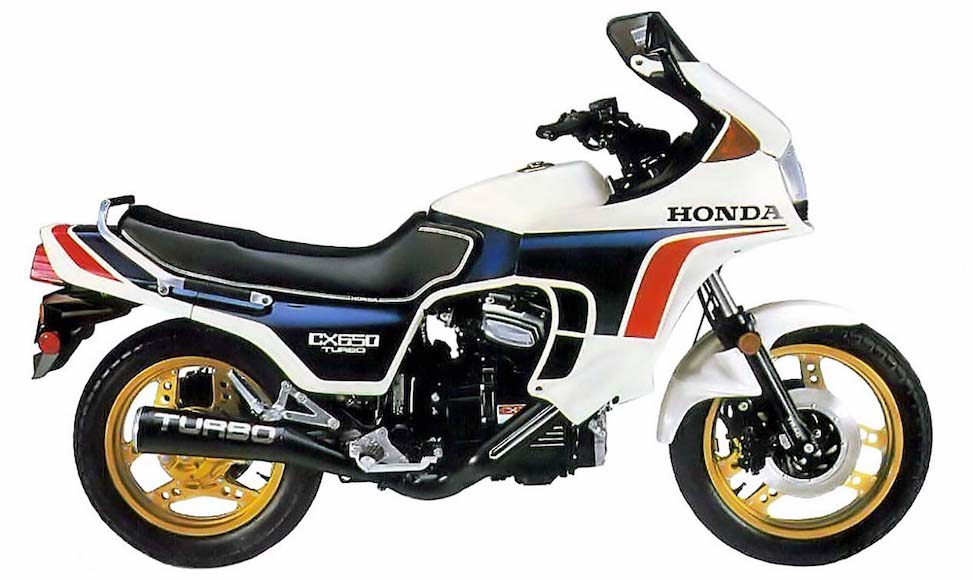 The CX650 wasn’t Honda’s first attempt at a turbocharged motorcycle, that honour went to their CX500 Turbo, launched around the same time as the XJ650 Turbo in 1982.

The CX was arguably the most unlikely candidate for turbocharging, being a hard working, shaft driven commuter and courier bike with a Moto Guzzi style across the frame V-twin.

The CX500 Turbo lasted a year in the Honda range before being replaced by the CX650 Turbo. Easily identified by its big fairing, resplendent with its garish ‘Turbo’ decals, the CX650 Turbo was definitely of its time.

Like all the bikes featured, the small production numbers pretty much ensure that they’re nailed on classic motorcycles these days. In total, less than 1800 CX650 Turbos were produced, most of which were sold in the States.

There’s a lot of other interesting stuff going on with the CX. Watercooling and fuel injection were cutting edge back in the day, as was the monoshock rear suspension. Where the 497cc CX500 was reported to suffer from heavy turbo lag, the 674cc CX650 was apparently much smoother to ride thanks to the lower boost pressure. It was still good for a claimed 100bhp and 140mph – impressive numbers for a roadgoing bike in the early Eighties.

If it came down to looks alone, Suzuki’s 1983 XN85 would probably be the pick of the crop. As it was, the 650cc four will go down in history as one of the company’s biggest lemons.

Like the Yamaha XJ650 Turbo, the XN85 was based around an air-cooled 650cc (actually 673cc) four. The ‘85’ in XN85 came from the claimed horsepower, although independent reports suggest that it would have been more accurate to name it the XN70!

Styling was in the vein of the popular Katana range, with silver paint and an angular fairing. Just 1153 bikes were built between 1983 and 1985 and they gained an unwanted reputation for poor performance and unreliability. Suzuki would go on to make up for the XN85 flop by changing the sportsbike world with the original GSX-R750 in 1985 though. 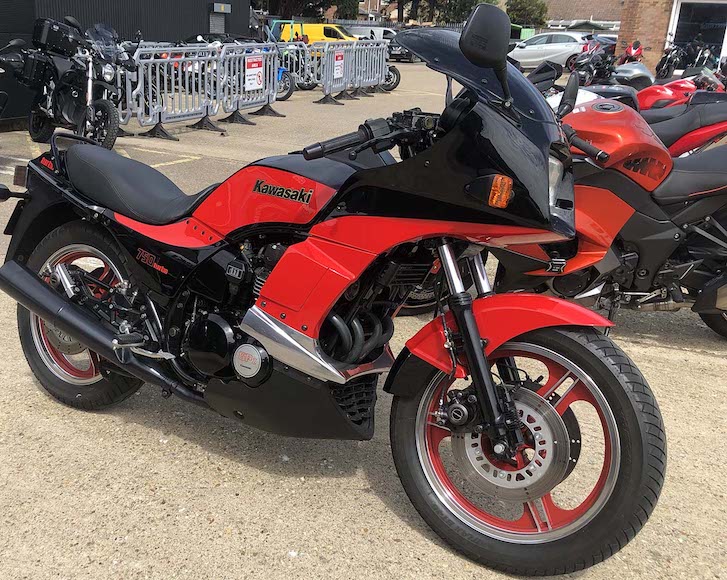 Last to the party and universally regarded as the best, the GPZ750 Turbo was the fastest production motorcycle in the world when it came onto the scene in late 1983.

Visually it was hard to differentiate the Turbo from the standard GPZ750, undoubtedly the strongest base model of all the Japanese turbos, with just some low key Turbo stickers and the obligatory gauges differentiating this street sleeper from the cooking model.

Internally the engine differed, with low compression pistons, a stronger gearbox and fuel injection, while the Hitachi HT-10B turbo charger was positioned close to the exhaust headers to reduce turbo lag. It made a claimed 112bhp and gave a 146mph top speed. Universally it was considered a good motorcycle, but with Kawasaki also offering the GPz900R and the GPz1100, it was shuffled out of the range after two years. 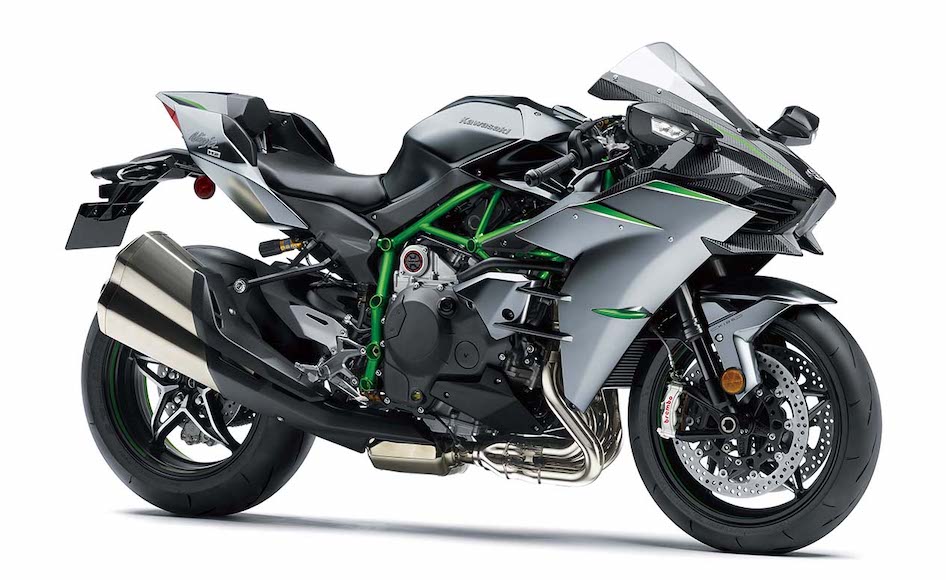 Kawasaki have always been at the forefront of forced induction motorcycles. The first example came in 1978, with the Z1-R Turbo. That was a US only model, using an aftermarket turbo charger fitted locally to shift some slow selling Z1s through official dealerships. The company also had the unofficial honour of building the best turbo bike from the short lived early ‘80s craze with the GPz750 Turbo (see above) and in 2014 they surprised the motorcycling world with this, the H2 Ninja, which is supercharged, rather than turbocharged.

Kawasaki launched two H2s. The H2R grabbed the headlines with its crazy 310bhp H2R, although it was not street legal (and too loud for most track days). The H2 Ninja is the road going version, with a ‘mere’ 200bhp and out there styling. A more touring version, the H2 SX, is also now part of the range and provides an interesting and not too expensive sports touring alternative.

The H2 Ninja has created a real halo model for Kawasaki and, with the company promising more supercharged models for 2020, we could well be in for a revival of forced induction machines in the not too distant future.