Can a Kawasaki Z900 really be a perfect track bike? 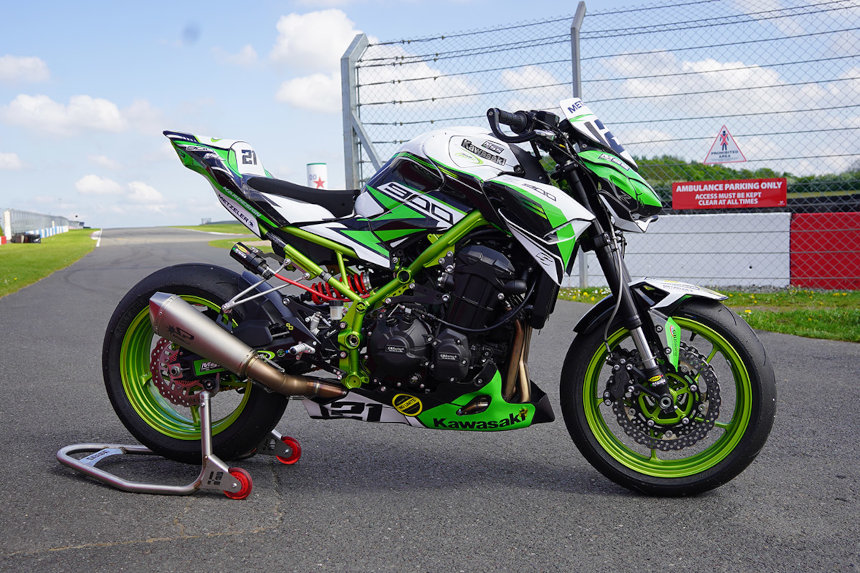 Sure, there’s no replacement for displacement. There’s nothing like grabbing a big ol’ handful of 200bhp and holding on for dear life, or utilising the glorious setup of the latest superbike-spec machine at the tight and twistiest tracks the UK has to offer. But it comes at a price; a pretty massive price in fact, as not only does power, tech and capability on modern machines soar, but so does the cost of buying and owning one.

And with the climate and world as it is, it’s not attainable for everyone – especially considering that the price of everything from fuel to trackdays is rising, and that’s without even mentioning tyres, which brutish sportsbikes will eat for breakfast. But what if you could have just as much fun without having to push to almost un-attainable limits for us mere mortals? And without breaking the bank? Surely, that would be ideal.

I mean, there’s a reason that CB500s have such a cult following in the racing and trackday community, but they don’t quite do it in terms of excitement and capabilities in terms of either their outright performance or handling abilities, and they can feel heavily outgunned on the bigger tracks too.

So surely something with a little more poke, that looks smarter would be perfect, right? Well, enter Kawasaki’s Z900 and the new Moto46 Streetbike cup series that runs with No Limits Racing, which allows just that – naked streetbikes, such as the Z900, Triumph Street Triple 765s and 890 Dukes, among others. This is the championship that we’ve been waiting for, for a sector of bikes that is selling by the bucketload. 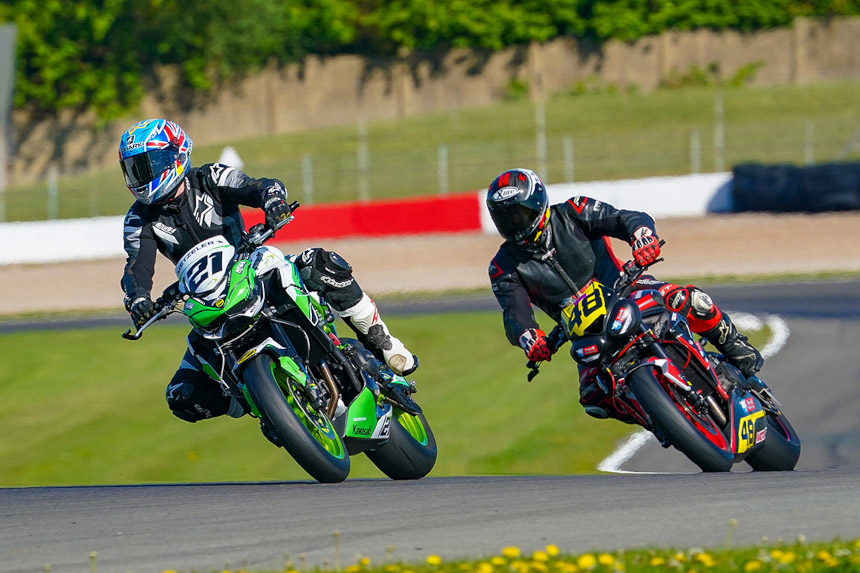 Think of it this way; where a stock, 1000cc sportsbike will cost you upwards of £16k for the barest, cheapest spec machines, you can build one of these race bikes for less than that and have some change left over to go racing. All they need is some suspension, an exhaust and remap, and then the usual racing modifications like crash protection, bodywork and a rain light (among a few other bits) and it’s ready to roll.

And I’ve got to say, the MSS prepared Z900 that I rode at Donington Park looked sublime; it’s proof that you don’t need a big budget for a good-looking track bike, and it looks just as mean on track as it does sitting on warmers in the garage too. You would not be embarrassed rolling this out of a van at a track day, far from it.

In all honesty though, the thing that matters with any track bike is the ride, and the Z900 was incredibly impressive, taking on the technical layout of Donington Park with ease. Sure, it’s not got arm ripping power on tap but the engine offers a linear and forgiving amount of power the whole way through the rev range, with the optional quickshifter making life easy through the gearbox.

Sitting around the 120bhp mark, it offers up enough power to work the tyre and offer excitement in terms of speeds, without being so much that you need to be heavily reliant on electronics or the rear brake; it’s almost the perfect amount of power for UK tracks, as it will make you work, but won’t completely knacker you out in the process. 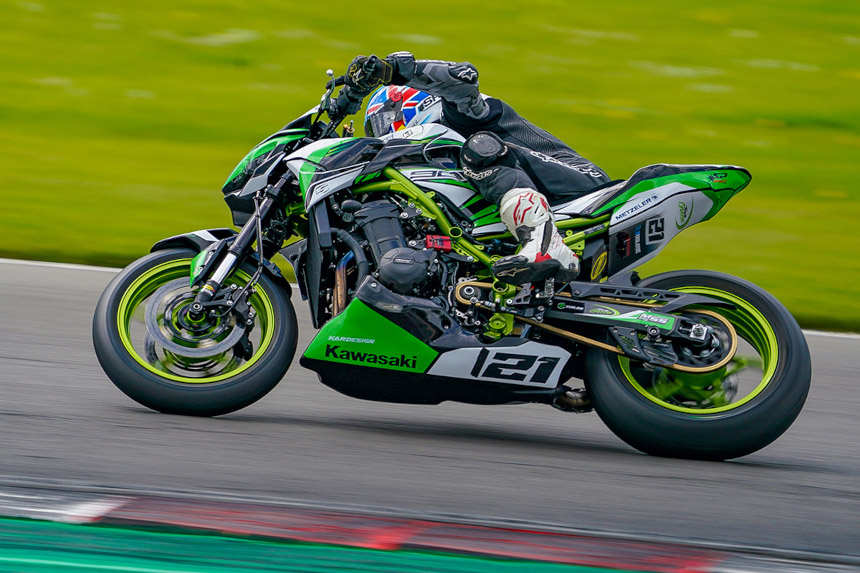 And then there’s the handling. Thanks to a simple suspension upgrade from K-Tech, the soft, gentle nature of Kawasaki’s Z900 chassis is taken up a notch, meaning that although it’s still incredibly forgiving, it offers a bit more pliancy when riding harder, and offers exactly the amount of feedback that you need to build confidence, when pushing to the edge on track.

It’s also worth noting that even though it’s a sit-up-style machine, I enjoyed the bars out riding position and I didn’t have a problem with ground clearance either, which can always be a worry with this style of machine.

But the best part is? The running costs. Unlike on a more aggressive litre bike or even a full-throated 600, thanks to the torquey engine, lower power and softer components (ie weaker calipers), the Z nurses consumables such as brake pads and tyres much better than a full-faired weapon. I did a full weekend on one set of tyres and just standard pads, in fairly warm temperatures, and I didn’t have to touch a thing besides checking the tyre pressures and putting fuel in the tank.

So, is it the perfect track bike? Well the answer is no, of course not. Even a GP bike isn’t perfect, but when looking at the pros, they vastly outweigh the cons. For an amateur rider looking to get out on track without scaring themselves silly, or living in fear or dumping £20k worth of superbike in the gravel trap, bikes like the Z900 are definitely worth consideration.

It’s easier to ride hard, confidence inspiring and softer on the bank account, while still offering the same (and potentially even more as you can get closer to the bike’s limit, easier) in terms of thrills.

It isn’t slow either. I was able to lap the two mile Donington Park National circuit in the low 1:15 bracket, just five seconds off the times I was able to set on a full-on Moto2 style machine on the same circuit a few weeks later. And, as the CB500 boys and girls will attest to, there’s something ever so addictive about humbling the latest superbikes on a track day with a bike like this. It’s a win however you spin it… and you can even race it with No Limits at the weekend.