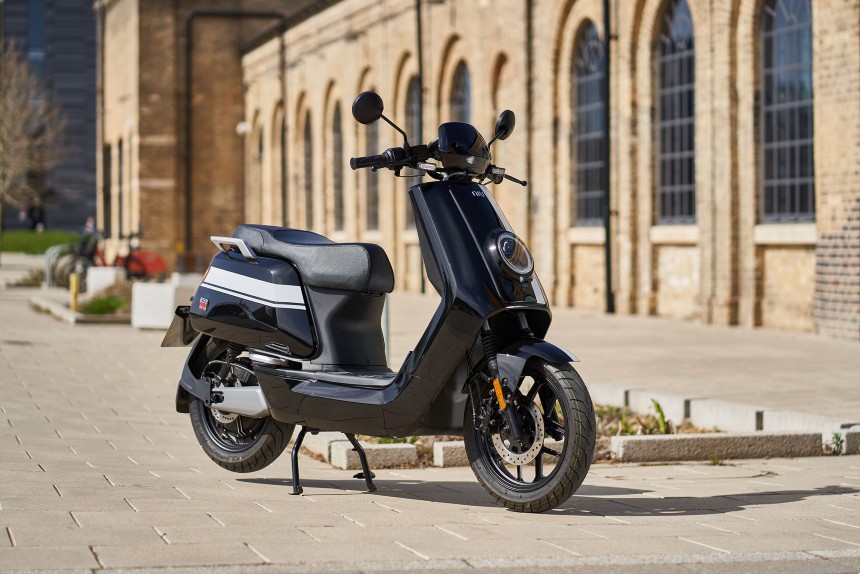 While you are likely aware of big-brand electric motorcycles, like Californian manufacturer Zero Motorcycles and Italian firm Energica, who provide the grid of MotoE bikes in the MotoGP support series, you may not know that electric mopeds and scooters exist, too. And they’re starting to make a lot of sense in the world we’re living in today as people begin to rethink how they travel.

Each month, the Motorcycle Industry Association (MICA) publish stats on all powered-two-wheelers (PTWs), from 50cc mopeds to the latest big off-road adventure bikes. In March, electric PTW registrations were up a massive 151.5% on the same month in 2020, and nearly 50% of all new mopeds are now battery powered.

Many of these are being bought by inner city couriers and take away riders but, with public transport falling further out of favour as a result of the coronavirus pandemic, we could be seeing a lot more electric scooters on our roads in the near future. So, what is an electric scooter, and what are they like to ride?

What is an electric scooter?

When you hear the term “electric scooter”, you’d be excused for immediately thinking of an electric version of the toy you spent hours playing on as a kid. Although they do exist, they’re generally referred to as “e-scooters” and don’t need to be road registered, display number plates or pay vehicle tax to be ridden. There are a lot of grey areas surrounding them.

The electric scooters we’re talking about here are conventional looking step-through scooters that can be compared to petrol-powered equivalent 50cc and 125cc scooters. They still need to be road registered, and you as the rider need the necessary licence, insurance and a crash helmet to legally ride one. 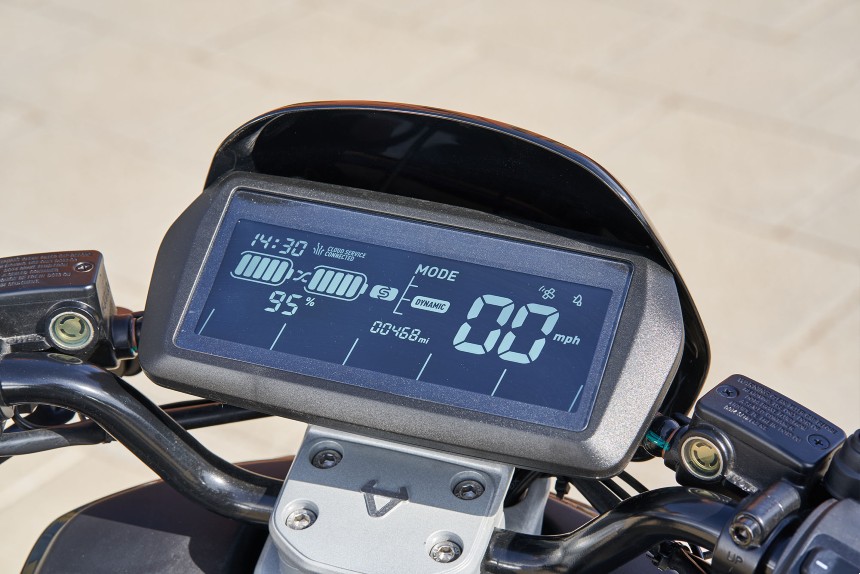 Getting to know electric scooters

There are more electric scooters on the roads now than ever before, so with popularity on a meteoric rise, we spent some time riding one to see if it was a realistic alternative to public transport. The electric scooter we rode was from a Chinese brand called NIU (pronounced “new”), which are the world’s best-selling electric scooter brand on the market right now.

NIU have seven electric scooters and mopeds in their range, starting at around £1,500 for the 50cc equivalent MQi model. The MQi is the most basic and least powerful in the line-up with a top speed of 28mph and a 20 mile range, and as a moped can be ridden by riders as young as 16. We spent the majority of our time with the premium NQi GTS model, which is more comparable with a conventional 110cc scooter in terms of size, power and licencing requirements.

It costs around £3600 for the standard version, or £4500 for the ‘extended range’ model, which features higher capacity Panasonic batteries to give a range of around 65miles, compared to just over 50 for the lower priced variant.

At first glance, the GTS looks like a typical step-through scooter, and a stylish one at that. The smooth bodywork, with minimal panel lines, makes the NIU look sleek, with the single halo front LED headlight really setting it off. It’s a trendy machine.

But take a closer look and the signs that the NIU is all electric are there. The lack of exhaust and obvious drive train being the main markers, with the 3.5kw Bosch motor sending power to the rear-wheel hub, which does a good job in delivering smooth and predictable power.

The wheel mounted Bosch motor takes the GTS to a top speed of 45mph. That figure isn’t headline grabbing, but for urban travel, the opportunities and need to get above that are few and far between. Importantly, it gets away from the lights sharply, allowing you to keep ahead of the traffic. 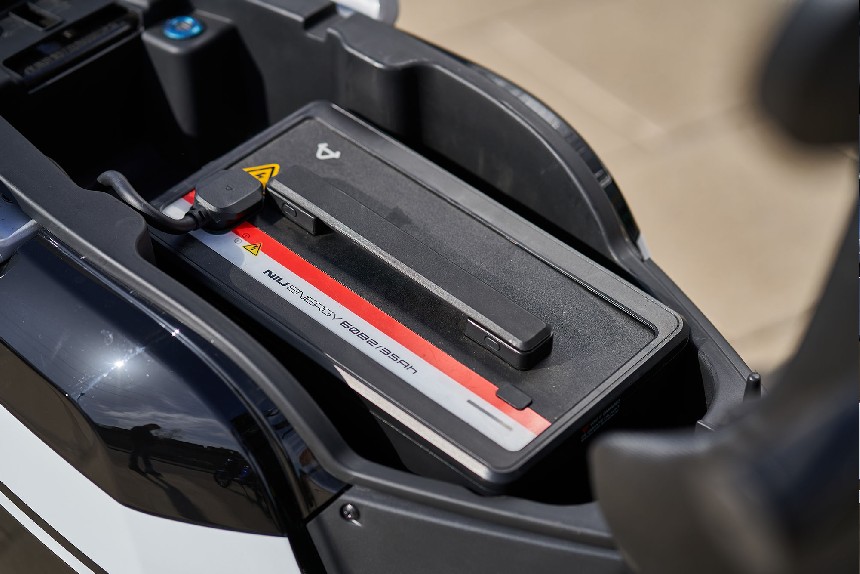 NIU have focused their efforts in making their models practical and affordable, two words which aren’t often associated with electric vehicles.

Both the NQi GT and GTS scooters are equipped with dual lithium-ion batteries (the main difference being that the GTS features larger, 14”, wheels). One sits in the floorpan, and the other in the area under the seat. These can be removed and charged at any time, just like the single-battery models, which is a real plus. As well as acting as an additional security device, not needing a garage with power to recharge the batteries eliminates one of the key impracticalities that people associate around going electric.

In most cases up until now, charging can be a stumbling block unless you have a garage with power, or off-road parking in reaching distance of a plug socket, or sufficient room indoors to wheel the whole bike in to recharge it. With easily removable batteries, which weigh just 11kg, NIU have actually made recharging more convenient than filling up a petrol scooter, and it costs just pence to get back up to full charge. Charge times are still lengthy at between five to seven hours for a full charge, but if you’re charging up overnight, that shouldn’t be an issue for most riders.

In terms of additional security, all NIU models feature a cloud connected ECU. As the brain of the bike, it monitors, collects and analyses information, letting you remotely control its GPS anti-theft tracker system. Any movement of the scooter will trigger alarms and send alerts to your phone through the dedicated app. With a precise GPS location, owners can see exactly where the scooter is at any time. You can also upgrade the scooter's software without having to take it to your local dealer.

Another convenient benefit of ownership is that electric scooters are virtually maintenance free in comparison to petrol scooters. There are far less moving parts, no liquids to check other than brake fluid, no chain to lube or belt to adjust. Vehicle ownership doesn’t get much simpler than that.

With urban mobility in mind, handing needs to be nimble and confidence inspiring. Although the common opinion is that electric vehicles are automatically heavier than equivalent petrol-powered machines because of bulky battery packs and motors, that’s just not true in NIU’s case, with the NQi GTS weighing just 113kg. For some comparison, that’s 18kg lighter than the new Yamaha NMAX 125.

But its light weight didn’t make it feel twitchy or unsettled on the road, it was quite the opposite. With the bodywork neatly surrounding you and travelling on its 14” wheels and its hydraulic suspension adequately cushioning bumps in the road, it felt a safe and was intuitive to ride, which is perfect for new riders looking for a public transport alternative.

Three different power modes easily activated by the handlebar switchgear as well as cruise control and an easy to read LCD dash are all nice details, and benefit the overall riding experience. Perhaps the only downside is that the battery takes up the space under the seat, which would be free to be used as storage on a petrol machine, but a large rear mounted top box is available as an official NIU accessory.

Can I ride an electric scooter? And should I?

The great thing is you can legally ride a NIU and other electric scooters after just one day’s Compulsory Basic Training, costing around £100. But, consider what type of journeys you usually do before taking the plunge into electric scooter ownership.

Electric scooters like the NIU are designed for people who live and work in large towns or cities, or just outside. If your usual commute includes any motorway or dual carriageway riding, then an electric scooter probably isn’t for you. They’re not quick enough to keep up with traffic on these roads and riding flat out for long periods of time will just drain the batteries.

Scooters are great for people who want inexpensive transport, and who perhaps live off the bus route or work shifts, but even if public transport is an option, substituting your 30 minute packed bus journey to and from work with a greener, more affordable and fun alternative, then an electric scooter like a NIU should be seriously considered. And if you work night shifts, you won’t wake the neighbours when you start it up!