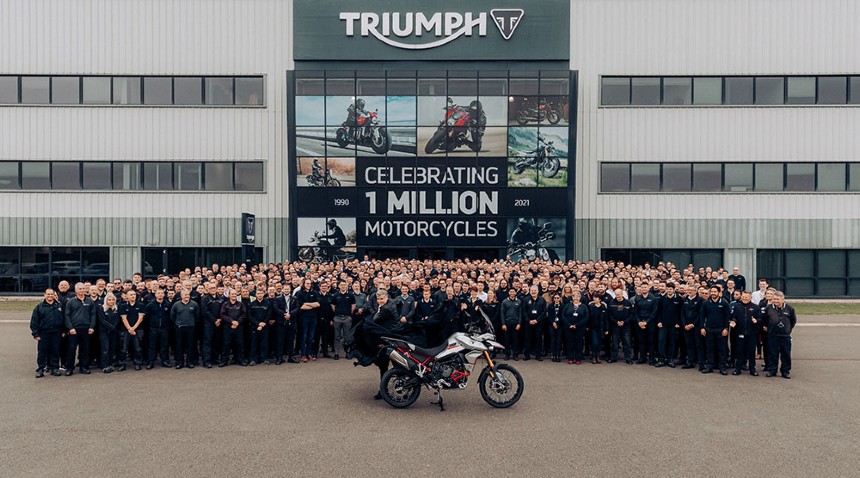 One of the greatest success stories of British manufacturing has hit a major milestone, as Triumph produced its 1,000,000th motorcycle of the modern era.

Triumph was revived by builder John Bloor, who bought the rights to the iconic brand in 1984. The company had been seen at the forefront of the global motorcycle market in the 1960s, only to fall into steep decline in the 1970s as better and less expensive Japanese bikes became commonplace.

Bloor took over five years to bring the brand back to life, assembling a crack team of engineers who studied the latest production techniques from Japan to build a range of sturdy modular models, using the same base frame and engine but with different fairings and riding positions to create a roadster, tourer and sportsbike version bearing name’s from Triumph’s glorious past, called the Trident, Trophy and Daytona.

Bloor unveiled the new company to the world at 1990’s INTERMOT motorcycle fair in Cologne, Germany, and the first bike, a four-cylinder Trophy 1200 rolled off the production line at the company’s new factory in Hinckley, Leicestershire, in February 1991.

Since then the company has gone from strength-to-strength, overcoming the devastation of a factory fire in 2002 to build back better. The destruction of the factory saw production move to the bigger Factory Two, just a few hundred metres from the original facility, while the first of three Thailand factories was opened in 2002.

The Thai facilities first made components such as frames and exhausts exclusively for Triumph, being sent over to Hinckley for final assembly, but the neighbouring Factory Four – opened by Prince Andrew in 2006 – included a paint shop and assembly line, which initially built models from the company’s Modern Classic range.

Today the majority of Triumph’s motorcycles are assembled in Thailand, but the company still retains production and R&D facilities at Factory Two, where the popular Factory Visitor Experience is also based.

The millionth motorcycle of the modern Triumph era was a Tiger 900 Rally Pro, which was given some special graphics to commemorate its place in history. The machine is unlikely to be ridden on public roads though, as it will be placed in the visitor centre following a stint at this month’s Motorcycle Live event.

With John Bloor now taking a back seat in the business, the day to day running of Triumph has been taken on by son Nick, who has been the company CEO for the past 10 years.

Speaking about the milestone, Bloor Junior said: “Everyone at Triumph is incredibly proud to have played a part in achieving such a momentous moment in the modern history of this iconic brand. Over the 31 years since we re-launched Triumph with a new line of British designed motorcycles in Cologne in 1990, we have shared so many great moments with our fans across the world.

“From returning to the TT champions arena, to entering the MotoGP paddock with our Moto2 engine partnership, to supporting the biggest global riding event and its great cause for health and wellbeing with the Distinguished Gentleman’s Ride, to mention only a few. Triumph’s success has always stemmed from the passion and commitment we share with our riders.

“While the last year has been challenging for all of us, this passion and commitment has driven Triumph to even greater heights, including the successful entry into new categories with the Trident 660 and Tiger Sport 660.

“Over the last three decades Triumph has maintained sustained and significant investment in our people, our partners and our in-house design, engineering and manufacturing capabilities, in order to grow the reach and reputation of this iconic British brand. This investment in home grown talent, both in the UK and around the world, matched by the passion we share with our riders for delivering the complete and perfect motorcycle, has seen the brand go from strength to strength, achieving the most successful year in the brand’s entire 120-year history.

‘’Furthermore, we are committed to taking the brand to even greater heights, and with the forthcoming launch of our brand new Tiger 1200, new competition motocross and enduro motorcycles, plus our strategic partnership with Bajaj to create smaller capacity bikes, I am delighted to say that the future for Triumph and its fans across the world will be just as exciting and rich as the last 30 years has been.’’

Despite global challenges brought on by the Covid-19 pandemic, Triumph has just enjoyed its most successful year ever, with more than 75,000 bikes registered globally and a turnover of £650 million.