I absolutely love a scrambler, and Ducati produce some of the finest in the business. Whether it’s for a little bit of light off-roading with the Desert Sled or just going for a bimble while looking like an absolute boss on their Icon, they all offer their own little touch of ‘cool’, while being built around the same platform and ethos. In fact, one of the only things they lacked was a Scrambler with a little more of a playful side, something that had a little more oomph, while still retaining that incredibly important element of coolness. Well, until now that is, as for 2022 Ducati introduced their new, Urban Motard. Sounds interesting, right?

Well, yeah. A cross between a standard Scrambler and the more mischievous, performance focussed Hypermotard, the Urban Motard seems to hit a slightly different nail on the head - not just in terms of its sporty, more aggressive look, but in terms of its price and spec sheet as well. 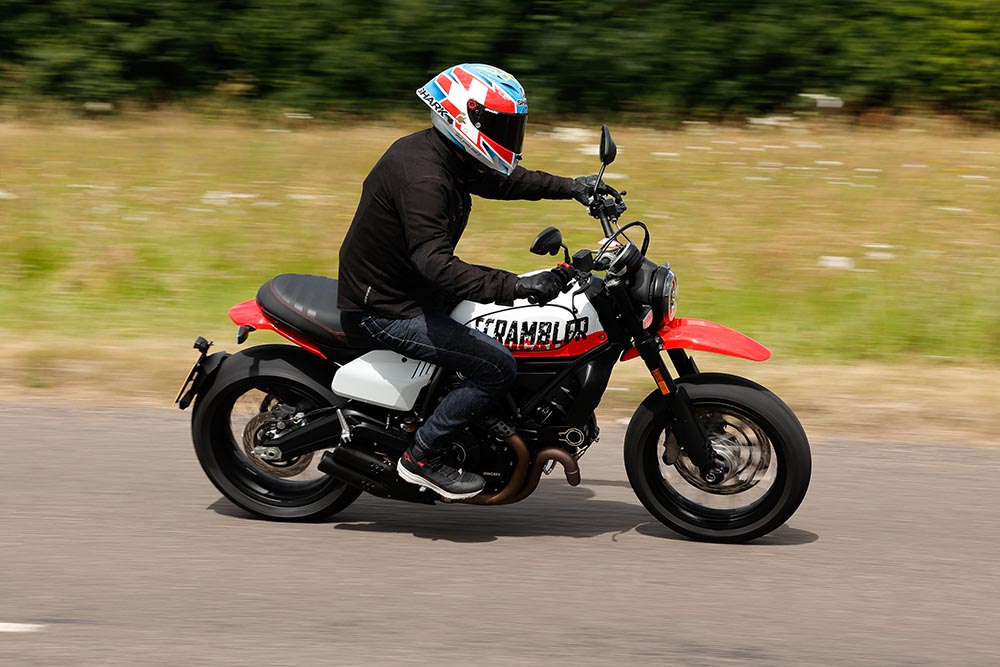 It’s still a Scrambler at heart. Powered by the tried and tested 803cc L-Twin engine, the Urban Motard pumps out a respectable albeit fairly restrained 73bhp and 66Nm of torque. It’s placed in a steel trellis frame and finished off with some nicely spec’d Pirelli Diablo Rosso III street tyres, spoked wheels and Brembo branded brakes, although electronic aids are minimal, with just ABS as standard. But then again, at £10,595, have Ducati hit the sweet spot in terms of laid back coolness against brute power and performance? Well, there was only one way to find out.

Even just looking at it, the Urban Motard is easily my new favourite model in Ducati’s, and just about anyone else’s, Scrambler line up. They’ve really nailed the silhouette. It uses the Scrambler base but thanks to that Desert Sled-esque mudguard and slightly sharper finish, with those gorgeous number boards and GP inspired paint scheme, it strikes that difficult balance of retro looks with a modern, performance-based edge. Oh, and a special shout out to those spoked wheels, as they absolutely complete the look as well. As with most models in the Scrambler family, the Urban Motard is not only very minimalistic in terms of controls and tech, but it’s also incredibly confidence inspiring, thanks its low seat height of 805mm and relatively narrow engine. With those big ‘bars it still felt more than roomy enough for me, and it has a seat long enough to accommodate pretty much every size of rider. Although it looks like a motard, it has a much more relaxed riding position than the usual, aggressively upright Supermoto style machines. Think of it more as a comfortable hybrid between the two. 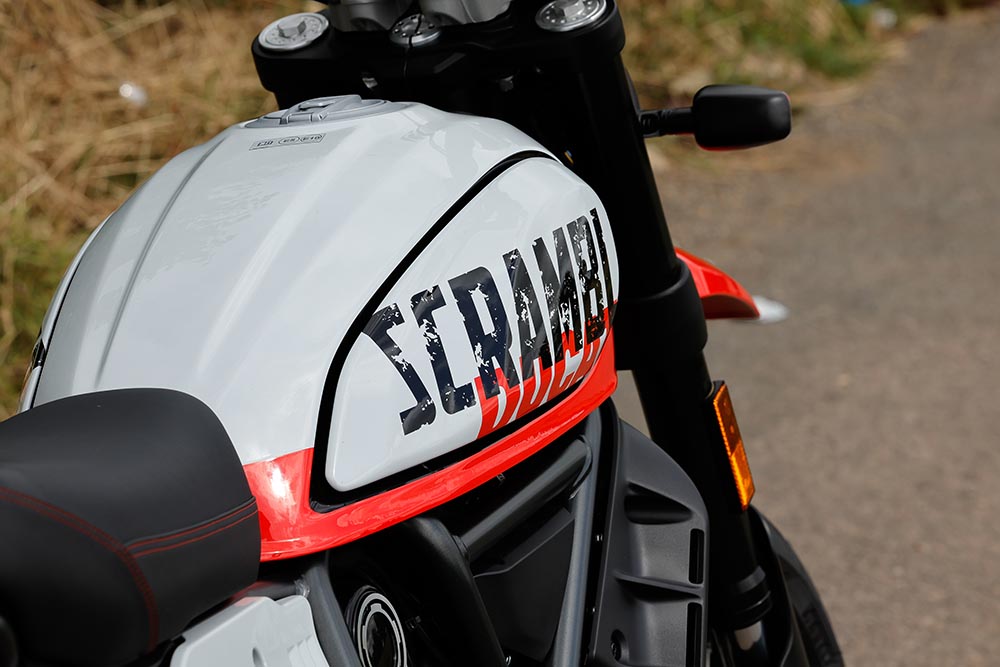 As much as I’ve grown to love electronic aids on track, it’s refreshing to jump back on something so minimalistic. There are no riding modes to mess around with, no riding aids to contend with and just a simple dash, which does a decent enough job of displaying all the information you need. Getting going and it’s easy to see why Scramblers are so popular. From the very first clutch release, everything not only feels super soft, but super easy too. The clutch is light, the turning circle is tight, the chassis is balanced and the best part is, that L-twin motor is almost uncharacteristically smooth from tick-over upwards. It’s the complete opposite of those lumpy Ducatis of yesteryear.

And the engine does pull nicely from nice and low in the rev range, although I have to admit I would’ve liked a little more top end as the revs started to climb towards the redline. I know it’s a tough gripe to have with an 803cc twin though, and the power is plenty enough for a bimble on the roads, but an extra few hp would’ve been welcomed for me – not just for a bit more excitement towards the roof of the revs, but if you ever do any motorway work, or stuff at higher speeds. But then again, I had to remind myself that this bike’s purpose is in its name. This is no factory supermoto or sports tourer but an Urban Motard, and in that respect it hits the spot perfectly. Enough power to have a bit of fun, but nothing too mad that you end up at licence losing speeds on the back wheel (cough, Hypermotard).

And even though it’s an Urban Motard, sitting longer and lower than a traditional motard, it doesn’t do a bad job at all on the open roads in terms of its handling abilities. You see, over the last few years Ducati have developed this special power of making pretty much every one of their machines handle incredibly well and, even without a mammoth price tag or Swedish bling on the suspension, the Urban Motard performs to a decent standard. Sure, it’s best suited to blatting around town at slow speed, but it’s by no means out of its depth on the open road, and for many riders, thanks to the softer sprung setup and less focussed attitude, it will be just as much fun, while being easier to manage for a lot of the time – especially over really dodgy roads. 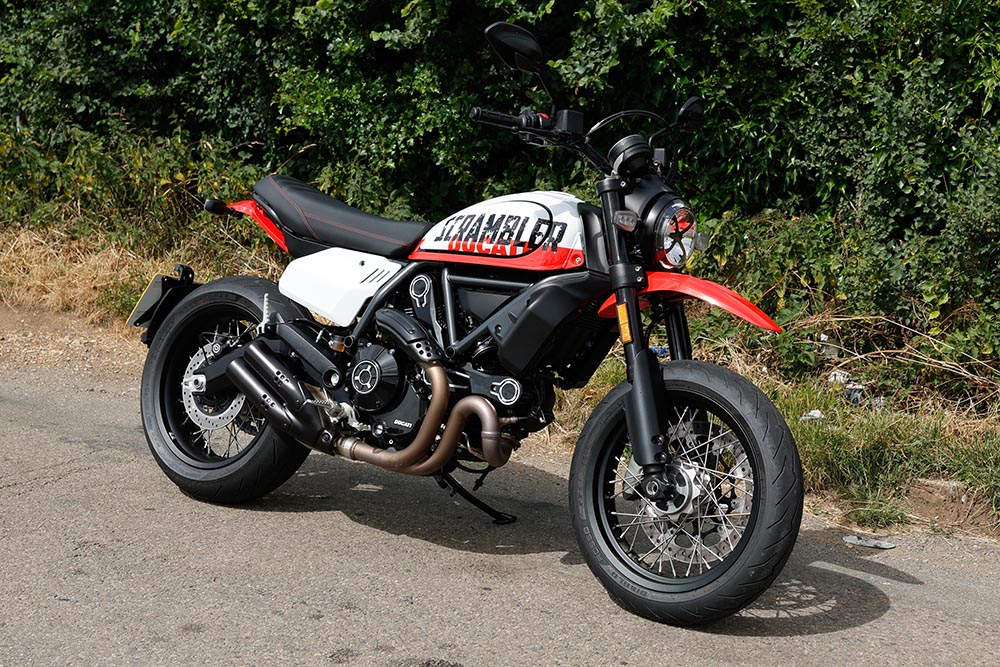 A Scrambler Ducati with a dash more performance, and a slightly more aggressive appearance? Now that is what I’m talking about. Sure, it lacks the electronic wizardy, triple figured power, incredible agility and that truly aggressive power of the Hypermotard, but it doesn’t need to be blasted for the rider to have a blast. And it’s not trying to be that either; It’s a Scrambler with a bit more edge, and considering its price, its performance and it’s appearance, I think Ducati have hit the nail on the head. In an ever-crowded retro market, it’s nice to see something a little bit different, especially when it works so well.