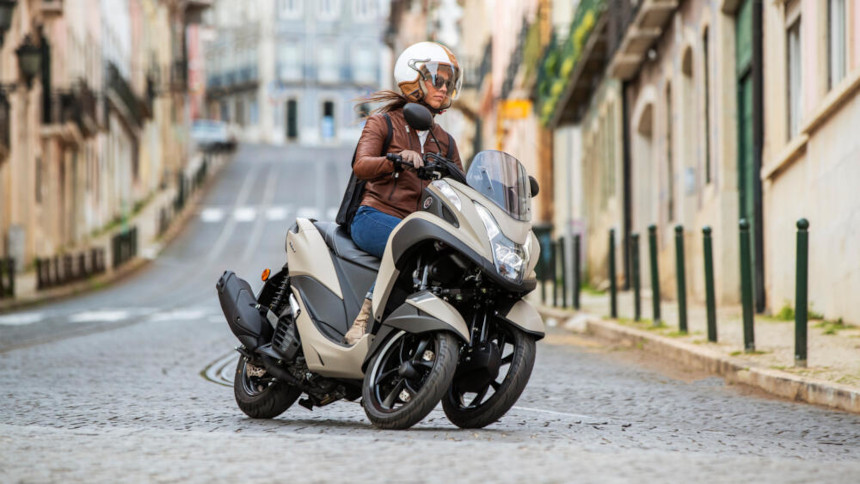 Yamaha’s Tricity 125 has proved a reasonable success in the highly competitive learner legal scooter capacity since its introduction in 2014.

The unique twin front wheel set-up gives the Tricity way more front grip and stability than a standard powered two-wheeler, even though its narrow track mans that it is no wider than an average scoot – making it a doddle to ride in heavy traffic. And while it hasn’t troubled the best-selling NMAX 125 or PCX125 in the sales charts, it has attracted a decent following among commuters and delivery riders looking for the added security offered by the extra front wheel.

Now Yamaha has announced a series of updates to its CBT friendly trike, not only making it cleaner and more efficient, but also more powerful and better specced.

At the heart of the update is a new engine which, like the NMAX and previous generation Tricity, features Yamaha’s Variable Valve Actuation (VVA) technology, switching the camshaft profile at lower and higher revs and theoretically improving both the low and high rpm performance. It’s also cleaner running than before, and now meets the latest Euro5 emissions laws.

Scooters are not really about outright performance, but one of the main criticisms levelled at the Tricity 125 was a slight lack of acceleration and top speed when compared to a traditional twist and go 125 – a combination of a moderate power output, extra drag and additional weight. Yamaha claims the same 9kw (12bhp) from the new engine, but says that it is more fuel efficient, something which is further boosted by a stop/start system which seamlessly cuts the engine when at a standstill. Whether top speed has improved or not remains to be seen, but the old Tricity could struggle to top 60mph when conditions were against it.

As well as the new engine, the latest Tricity 125 gets a chassis update and some additional spec. The frame has a 60mm longer wheelbase, which allows for bigger footwells and better rider comfort. Suspension has been updated too, for more comfort and stability, while convenience is enhanced with the addition of a new keyless set-up and LCD instrumentation which can be connected to a smartphone using Yamaha’s MyRide app.

The 2022 Yamaha Tricity 125 will be available from August, and comes in two colour options – Matt Grey or a Petrol Blue and Sand Grey combo. No word yet on the price, but expect a small hike on the 2021 model’s £4150.