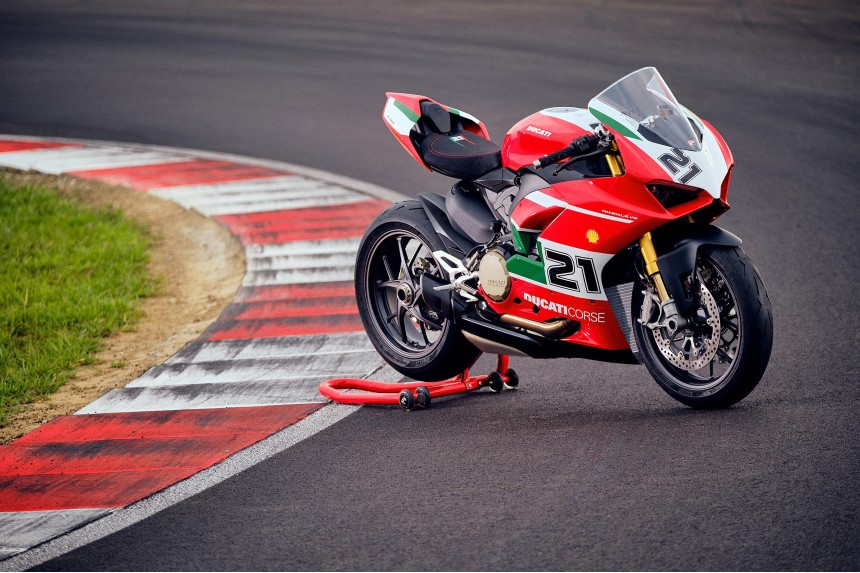 Ducati are well known for perking up its models to create highly desirable limited editions, and the latest example off the production line pays homage to one of its favourite sons.

The snappily titled Ducati Panigale V2 Bayliss 1st Championship 20th Anniversary is a tribute to Troy Bayliss, who won the first of his three superbike world titles for Ducati in 2001.

The Aussie racer, who also won the 1999 British Superbike Championship on a Ducati, took the all 52 of his world superbike race wins on the Bologna bullets and would go on to take the title again in 2006 and 2008 – in addition to winning the 2006 Valencia MotoGP as a replacement rider.

As the name suggests, the special edition is based around the Panigale V2 – Ducati’s 955cc V-twin sportsbike. As well as the racing style livery with Troy’s famous number 21, the Bayliss bike, runs Ohlins suspension front and rear and is 3kg lighter than standard thanks to the adoption of a race-style lithium-ion battery. It will cost £17,995 when it lands in dealerships in October, nearly £3,000 more than the standard model.

Ducati unveiled the bike to coincide with the recent Assen round of the Superbike World Championship, the Dutch venue where the tenacious Aussie secured his title in 2001, and the Panigale V2 may feature on the racetracks itself in 2022 as part of a rule change in the Supersport World Championship.

New rules are being drafted up to include the Ducati and Triumph’s Street Triple alongside the crop of 600cc four-cylinder machines currently populating the grid. Triumph are developing their contender in the British Supersport Championship while the Panigale V2 can be seen in the Ducati TriOptions Cup, where lap times are in line with those of the 600cc machines in the superstock class.