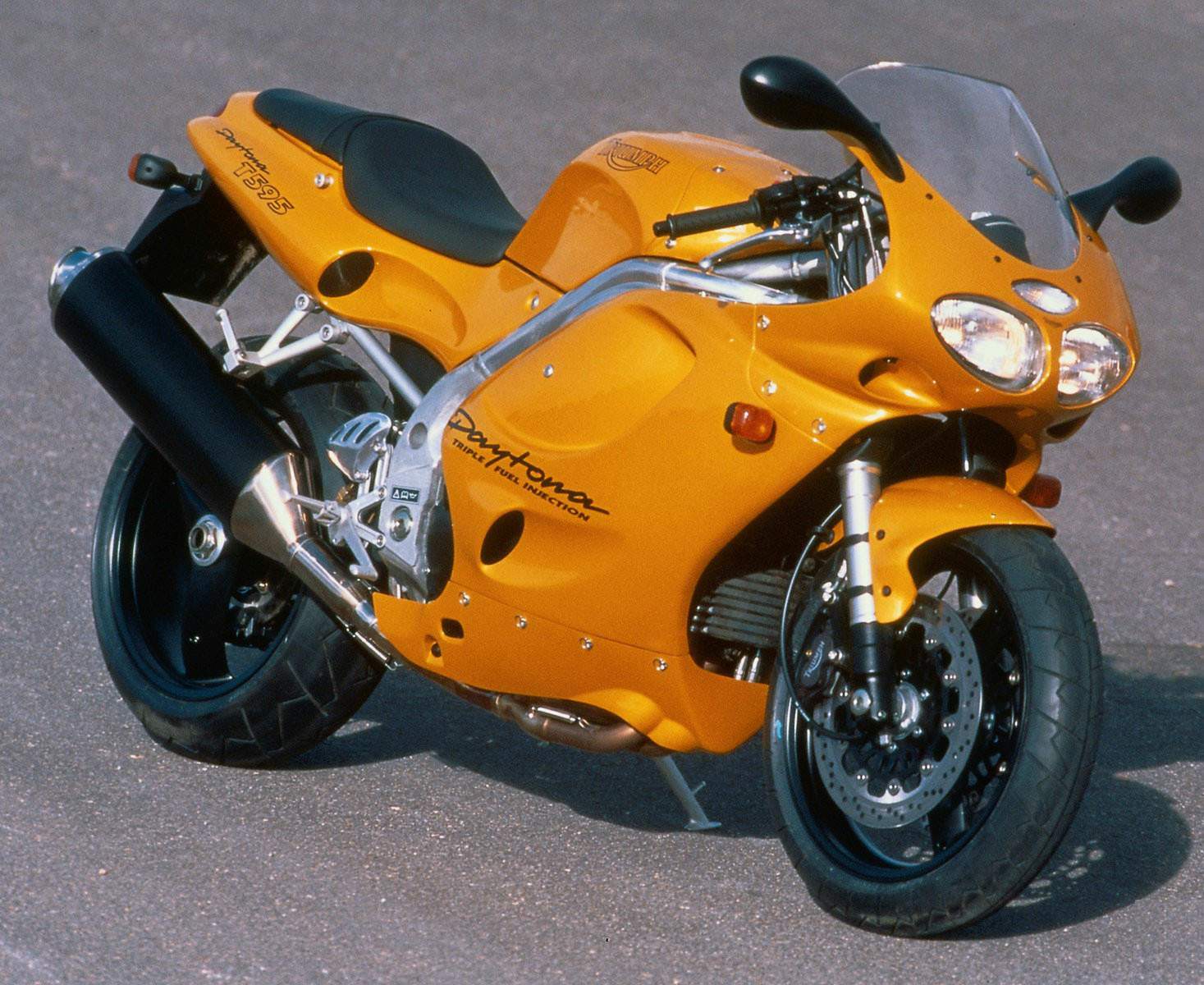 Back in 1997, the revived Triumph company had a reputation for building sturdy motorcycles that were arguably a little dull. Led by publicity shy owner John Bloor, the company took a modular approach to building its motorbikes and all models shared the same basic frame, while the engines were based upon the same architecture. All used the same 76mm bore pistons, but with a combination of three and four cylinder engines, long (65mm) and short (55mm) stroke crankshafts they were able to build a range of bikes with capacities from 750cc to 1200cc.

This modular design, combined with Bloor’s fastidious approach to build quality and desire to shed the perception that British bikes were a bit shonky, led to an over-engineered model line up that was a bit bland, heavy and somewhat samey, even if they were good bikes. It had been enough to satisfy the faithful when launched in 1990, but seven years on Triumph broke from the modular approach with two new bikes, the T509 Speed Triple and this, the Daytona T595.

Motorcycle design, especially for sportsbikes, evolved massively in the 1990s. Bloor had purchased the rights to build motorcycles bearing the famous Triumph name in 1984 and spent the rest of the decade developing the new models in secret.

With that in mind, it’s no surprise that the Triumph models launched in 1990 leaned heavily on the kind of technology found in the Kawasaki GPZ900R, which itself came out in 1984 and was considered the best and most modern bike of the time.

The 1997 Daytona was hardly at the cutting edge, but it shed most of the 1980s technology of the original ‘T300’ models, particularly in terms of the chassis design. Out went the old steel spine frame used by the modular models, replaced by a distinctive perimeter style frame made out of twin-section aluminium tubing – a design that would become something of a trademark for sportier Triumphs for decades to come. The engine was an evolution of the old triples, but virtually nothing was left unchanged internally, and the electronic fuel injection system, developed by French company Sagem, was based on technology from the car world and something of a novelty in 1997.

Here was a British bike that could really take on the best sports bikes in the world. In truth, the 955cc triple wasn’t quite a match for the Honda CBR900RR FireBlade, but it stacked up well against the 750cc fours and even Ducati’s legendary 916.

Like that Italian bike, it was the styling that won the hearts of late Nineties sportsbike buyers. Where previous Triumphs had been handicapped by a frame design that made them look and feel unwieldy, that aluminium frame looked like a work of art. The stylish fairing had more than a hint of 916 about it, as did the single sided rear swingarm, and some classy colour choices, including a posh looking yellow option on launch, gave it more premium look than the Japanese competition.

It went well too. In true Triumph style, it was a quick road bike rather than and out and out race replica for the trackday fiends – an Aston Martin to Ducati’s Ferrari if you will. The company claimed 128bhp from the Lotus developed motor when new, but the beauty was the way in which the power was delivered. The three-cylinder motor was full of character, torquey and much lazier to ride than a Japanese four. The gearbox, a Triumph Achilles heel for decades, was as clunky as ever and it wasn’t the lightest bike on the market either, at a claimed 214kg, but it went well and was a quantum leap from previous models.

Triumph fans loved the T595, especially in Britain, and it sold well, as did the naked T509 Speed Triple, which gained a real cult following with its twin bug eyed headlights. An embarrassing recall to replace the polished frames on the T595 wasn’t great publicity for a business so focused on building a reputation for excellent quality, and those rectified bikes (as almost all should be now) lost their shiny frames in favour of painted replacements.

The Daytona T595 is an iconic bike because it marks an important moment in the history of Triumph, a time when they had the confidence to start taking on the big boys at their own game. Not that it was a complete success. Sales couldn’t match its rivals, hardly surprising considering it was still a relatively new company with a fledgling dealer network and a less glamourous image than its rivals, who were out demonstrating their wares on the race track at weekends.

That T595 moniker was thought to cause problems too. T595 was the internal factory model designation, given right at the beginning of the design process. The first modular models had been the T300 series, the Tiger 900 the T400. The new generation bikes were the T500 series, the Speed Triple being the T509 and the Daytona T595. These code names differentiated the new models from the ones they replaced, but T595 in particular confused many potential buyers, who thought that it referred to the engine capacity and dismissed the Daytona as a 600cc class bike.

Triumph quietly dropped the T595 and by 1999 it was officially known as the Daytona 955i, with a ‘955’ decal boldly emblazoned across the side in case of any doubt. A 2001 update gave the 955i a power boost, up to a claimed 149bhp, while the weight dropped by over 3kg, thanks in the main to a lighter and more conventional twin sided rear swingarm.

Later 955is were better bikes but lacked the wow factor of those early examples. The fairing was redesigned and looked bulkier, with its bigger single piece headlights and more angular lines. A minor update for the model’s last two years, 2005 and 2006, addressed this with slimmer upper fairing, split headlights and a smaller rear tail hump. These final bikes also had black frames and returned to the single sided swingarm which despite being heavier was definitely better looking. The 2002 limited edition model, celebrating 100 years of Triumph, also ran the single sided swinger and one of the most desirable of all the T595 Daytonas.

These bikes are well into modern classic territory, indeed it’s hard to believe that the T595 is almost a quarter of a century old. Styling on the early bikes remains timeless and the decision to go with classy single colour schemes rather than garish graphics, as were popular on Japanese sports bikes of the time, means that it won’t look out of place in a field of modern bikes.

Triumph’s T595 may not have been a bike that changed the world, like the R1, 916, FireBlade or even the original Bonneville, but it represents an important time in Triumph’s modern history and the closing of an era when all the company’s wares were assembled in Britain. It remains Triumph’s last ‘big’ sportsbike and its loss is lamented by many. Amazingly decent ones can still be found for less than £2k, making it a lot of historical sports bike for not a lot of money.