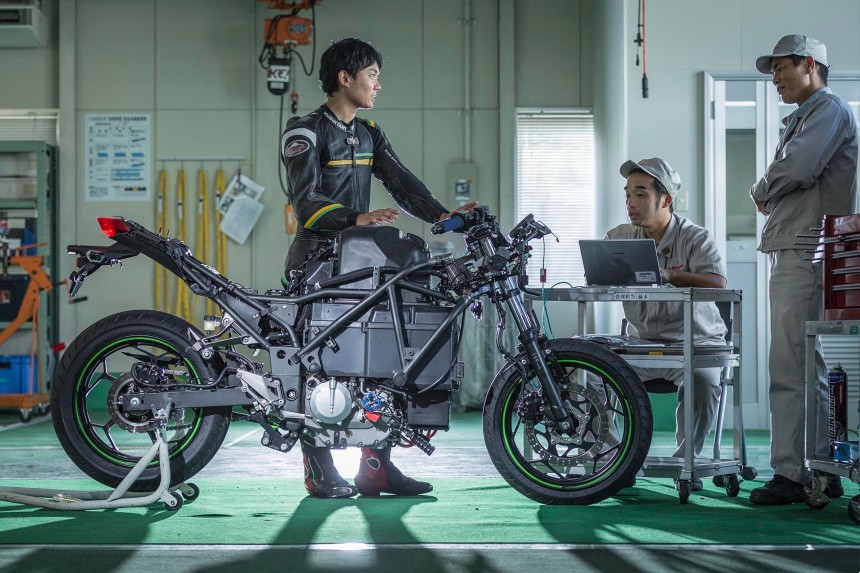 Those models will likely not just include motorbikes, as Kawasaki has a diverse product portfolio that includes jet skis, generators, quads and off-road ‘side-by-side’ vehicles, however bikes will certainly play a central role, as the company hinted at a hybrid sports tourer to go alongside a fully-electric prototype first seen in November 2019 and a development engine based upon the existing Ninja H2, but powered by hydrogen.

The company has a new logo, in part due to the fact that the new ‘Kawasaki Motors’ has been spun off from the giant Kawasaki Heavy Industries, which manufactures huge industrial equipment, including ships and trains. The new business promises to be autonomous and more agile as a result, and will be focussing solely on consumer goods.

Kawasaki demonstrated its first prototype small electric machine a few years back. Based around a Z400/650 hybrid chassis and featuring a four-speed gearbox, it was the first indication that the brand is serious about electrification. After a few fairly fallow years in terms of product development for Kawasaki, Mr. Ito also intimated that the brand will be introducing an average of 16 new motorcycles a year by 2025.

The idea of a hybrid motorcycle is an interesting concept for many motorcyclists. While fully-electric machines like Energicas and Zeros offer thrilling performance, range and charging time remains a negative for many big mileage riders. Having a smaller battery, combined with a smaller internal combustion engine, in theory gives the best of both worlds.

The challenge with hybrid motorcycles has always been the difficulty of packaging a traditional engine and fuel system as well as a battery and electric motor, without making it excessively expensive, heavy and unwieldy. The photographs released show a photoshopped image of the current Ninja 1000SX and it will be interesting to see how they approach the subject. While mainstream hybrid cars have started to become overlooked in favour of fully electric vehicles, hybrid supercars from the likes of Ferrari, Porsche and McLaren have reached new territories when it comes to delivering 200+mph performance.