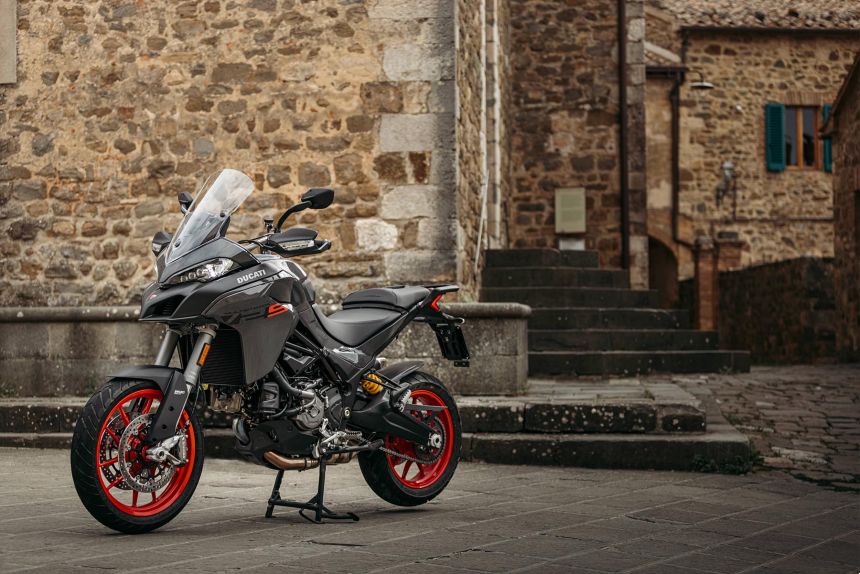 The new name brings the latest Multistrada in line with the bigger Multistrada V4, although the reality is that the new machine is actually a gentle evolution of the very capable 950.

Indeed, it shares the same basic 937cc ‘Testastretta’ V-twin engine as the model it replaces but, as part of a series of upgrades to get it through the latest Euro5 emissions laws, it is around 2kg lighter than that of the outgoing bike – contributing to a total weight saving of 5kg.

Changes to the motor include new conrods and a significantly lighter clutch which, when combined with an updated gearbox, promises a lighter and more accurate gear change.

Another big weight saving comes from the Multistrada V4 derived wheels, which are 1.7kg lighter than those found on the old 950, and the subtle cosmetic changes all help create a stronger family link between the twin and the four. The V2 also gets the V4’s footpegs and lighter mirrors, while the new saddle and tweaked ergonomics also brings it closer to the riding position found on the bigger machine.

Once again, two versions will be available with the V2S featuring fancier, semi-active, Skyhook suspension. Prices start at £12,495 for the base version, with the S coming in at two grand more. That’s a lot of money for a sub 1000cc adventure tourer, but there is plenty of spec for the money.

Ducati’s electronics have become the stuff of legend in recent years and that continues with the latest Multis. Once again the Italian company has thrown the kitchen sink at the V2, with everything from four riding modes, cornering ABS, full up-and-down quickshifter and Ducati’s new brake light system, which activates a more visible flashing brake light when the rider makes an emergency stop.

If the Ducati Multistrada V2 floats your boat, they’ll be in dealerships from next month.