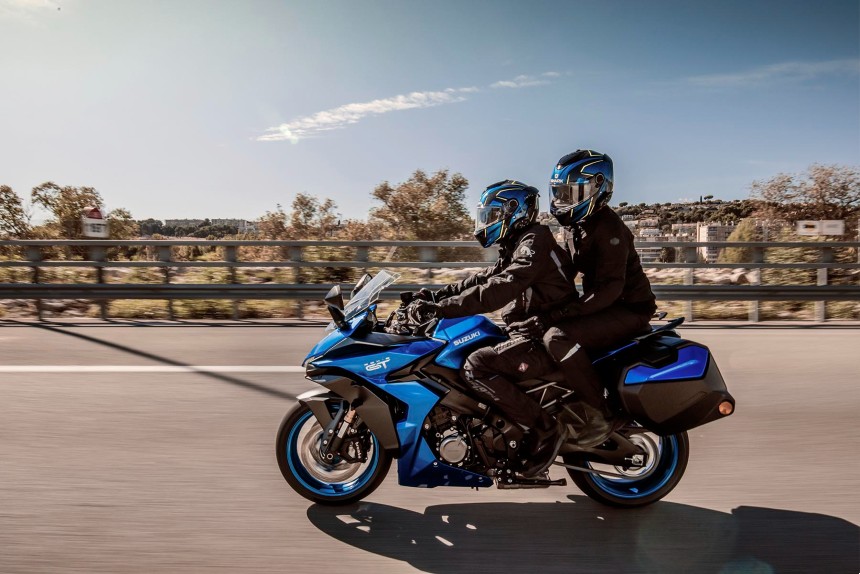 A sporty tourer for under twelve grand? Now that doesn’t sound bad at all.

Sports tourers have always been incredibly popular throughout the years, as they tend to offer not only a decent amount of performance, but also a much more comfortable ride than a traditional sportsbike, especially if you ride with a pillion. And while adventure bikes have wrestled sales from these all-rounders in recent years, Kawasaki’s best-selling Ninja 1000SX has shown that there’s still plenty of appetite for a well-priced sporting all-rounder.

Suzuki’s GSX-S1000F has also been at the forefront of this sector, but after six years in the showrooms the updated GSX-S1000GT is here – essentially a faired version of the GSX-S1000 we saw earlier in the year and a motorcycle that very much appears to have the Kawasaki Ninja 1000SX in its sights.

Equipped with near enough the same chassis components as the GSX-S1000, not to mention the very same GSX-R1000 K5 derived engine, the GT has been given a host of modifications to turn the supernaked into what they claim is an impressive mile-muncher.

Most obviously, you now get a full fairing equipped with a hefty screen and a new seat design, with a slim tail system, a compact exhaust pipe and a new seat for the rider and pillion too, which Suzuki say is designed for comfort and high mileage. The riding position has been altered to be more upright and therefore more comfortable and alongside this, the GT comes equipped with a different set of cast-aluminium wheels and Dunlop Roadsport 2 rubber.

It comes with all the tech that you might ask for in a grand tourer, including rider aids, rider modes, a quickshifter and autoblipper, cruise control, LED lights and a new, chunky, Bluetooth compatible 6.5” TFT dash, which allows for more functionality, especially when using Suzuki’s mySPIN app.

The bikes will be available in dealerships from November this year and prices start at £11,599, right in the ballpark of its green coloured competition. As with the Kawasaki, that price is for the base model – without panniers – and matching side cases adding around £1000 to the price.