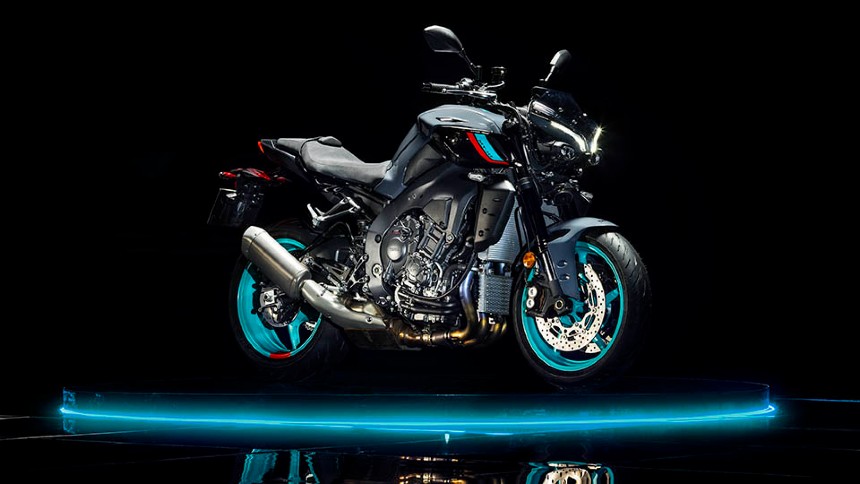 Yamaha’s flagship naked model gets some big refinements for 2022.

Yamaha’s MT-10 has always been an incredibly potent weapon in the supernaked sector, making up for its comparatively modest power and tech with a bucketload of torque and one of the most exciting rides that you’ll find from a standard machine. And now for 2022, it looks set to be even better than ever before.

For starters, Yamaha been to work on the very heart of the MT-10, donating the updated (but detuned) engine from its faired brother, the mighty YZF-R1. This means that it has some nice additional features such as lightweight aluminium forged pistons, offset con rods (which are steel rather than the R1’s titanium units) and direct-plated cylinders, which all adds up for more performance – although the exact figures aren’t available just yet. The previous MT-10 pumped out 160bhp, a mighty figure but still lagging behind European competition like the Ducati Streetfighter V4, Aprilia Tuono 1100 and the KTM 1290 Super Duke R.

Although we don’t know the 2022 MT’s ultimate stats, the engine also gets a revised fuel injection strategy, which claims to offer more torque between 4,000 and 8,000rpm, while a new titanium exhaust and redesigned intake work together for a better sound, throughout the rev range. Alongside now being Euro5 compliant, Yamaha tell us that the fuel economy is better too, which is a bonus as the biggest MT has always been fairly thirsty in terms of its fuel consumption.

It’s not just the engine that’s seen some refinement either, as the MT-10 comes equipped with a new Brembo master cylinder to complement the same 320mm disc and four piston radial mounted calipers from the R1. And although it comes with the same forks and shock as before they’ve optimised the suspension settings as well, and stuck it on a set of Bridgestone S22 rubber for good measure.

Electronically, the 2022 model has been given a quickshifter as standard alongside a new speed limiter which goes hand in hand with the suite of rider aids, covering everything from cornering ABS, to Slide Control, Lift Control and beyond. This is all fed into a six-axis IMU and fired out through a new, full colour TFT display which contains four rider modes too.

In the press release, Yamaha promised more power, more control and more adrenaline than ever before. It certainly likes they’ve delivered on that statement, and we can’t wait to swing a leg over one in the near future to find out.