American electric bike manufacturer Zero Motorcycles has launched its first ever faired bike, the SR/S, as it expands its range to eight models.

The SR/S is heavily based on the well-received SR/F streetfighter, which was introduced last year. Zero says that the handlebars are higher, the footpegs lower and the pillion seat revised, but it’s the addition of the fairing that will create the most interest.

Despite rapid improvements in technology in recent years, the issue of range remains one of the barriers to many dyed in the wool bikers. Zero says that the addition of the fairing will increase the range by 13% over the unfaired SR/F on the open road, assuming that the rider is tucked in behind the screen. When Insidebikes tested the SR/F last year we were able to comfortably get 80 miles between recharges on a run (and close to double that around town), so it would be fair to assume that the faired bike will be able to do between 90-100 miles on a motorway trip – probably more if ridden gently. In addition to the looks (and expected increase in comfort) the extra range may well tip the balance for riders who like the idea of going electric, but who want to do a little more distance between recharges.

Mechanically, if that’s the right word, the SR/S has much in common with the ‘F’ meaning that it has the same 110bhp/190Nm air-cooled electric motor and 14.4kwh lithium ion battery pack. That torque and instant power characteristic is what makes electric vehicles stand out, while the battery capacity is essentially the amount of ‘juice’ (or electric units) it can store. Zero also make an optional range extending ‘Power Tank’ which take the battery out to 18kwh and gives around a 25% range increase. Claimed city range for an SR/S with Power Tank is 200 miles.

Uninhibited by the need to fit air scoops and cooling ducts in the way that a petrol bike does, the Zero’s fairing is smooth with large surface areas not dissimilar to Buell designs of years gone by, and a large LED headlight arrangement. 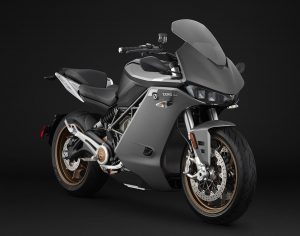 The revisions to the riding position are likely to lead to a more relaxed riding position than the SR/F. Judging by their initial publicity material, Zero is not pitching the SR/S as a touring bike, or indeed a full on sports machine. As a super commuter it looks like it could win the hearts of an increasing number of riders, being cheap to run during the week and likely a lot of fun for short weekend blasts.

Of course, electric motoring’s other elephant in the room is often the showroom price and at first glance the SR/S looks like a pricy commuter tool. At £18,090 (after knocking off a £1500 government grant) it’s just £600 more than the unfaired bike. It’s a lot of money, for sure, but as anyone who has ever owned an electric vehicle will tell you, they are cheap as chips to run – with a full charge costing not much more than a litre of petrol.

Zero also make a premium version, costing £2000 more, which has a faster charging system and heated grips. With a 3kw onboard battery charger, that standard model will take around 4-5 hours to fully recharge at home, and a little less using a dedicated public EV charging post. The 6kw charger on the premium bike will be no quicker at home (due to the limitations of a domestic plug socket) but will charge on an EV charging post in less than two hours. There’s also an optional charger to take the capacity up to 12kw, and charging time down to around an hour.

Like fellow Californians Tesla in the car market, Zero are forging the way on two wheels. Ten years ago an electric car was a novelty embraced mainly by greenies and IT geeks, but these days some of the most desirable four wheeled vehicles on the road are battery powered. If that logic translates to bikes, the SR/S may well be part of a new generation of electric motorcycles that breakthrough into the mainstream.

The Zero SR/S probably won’t have traditional bikers flogging off their petrol bikes and chopping them in for electrics in big numbers just yet. It does, however, continue the inexorable rise in quality and choice in the electric bike market. With Harley-Davidson already in the market with its LiveWire, and most other mainstream players showing an interest in launching their own battery powered bikes in coming years, the SR/S only adds to the ‘normalisation’ of electric bikes.