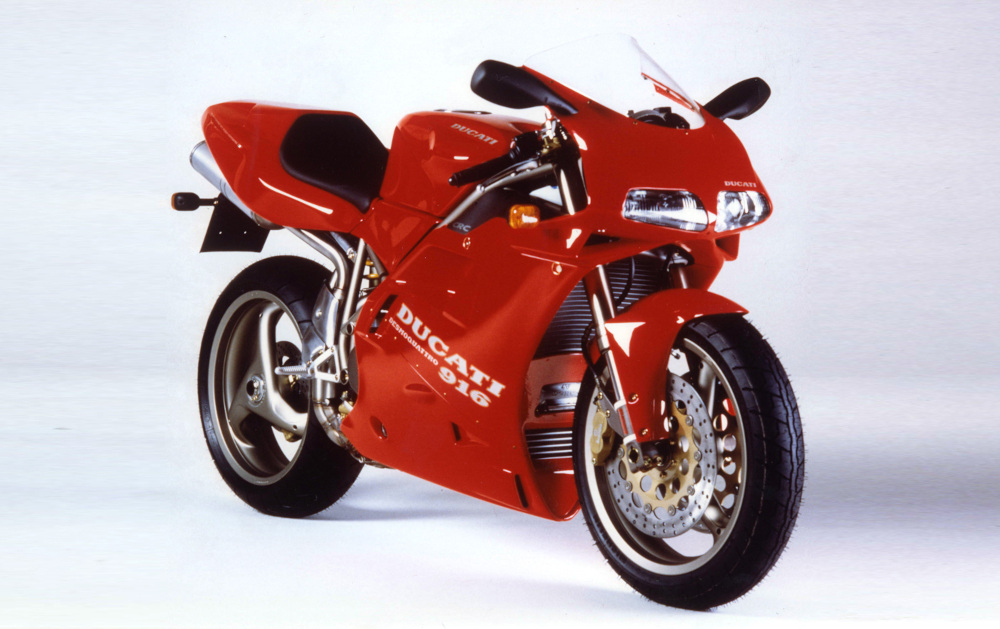 Several hours after handing the keys of the 748SP back to its owner, the adrenalin has not yet subsided. My head aches fit to split, the result of too much sun and the day-long roar from wind and high-level carbon cans (Next time I’ll wear earplugs…). When I shut my eyes, I have visions of a dancing tachometer needle or one particular tightening downhill left-hander that took even the SP close to its limit of adhesion. I’ve barely stopped twitching at the thought of unmarked police cars and blue flashing lights.

Few bikes on the road assault the rider’s senses like the Ducati 748SP. Its brilliant yellow bodywork jabs you in the eye, it’s booming exhaust note batters your ears, its stunning combination of acceleration, braking power and cornering ability takes your breath away. A day at speed on the SP leaves your reflexes sharpened, your riding skills honed, your nerves jangled, your body pummelled. Relaxing, the 748SP isn’t. Exciting, it certainly is.

Okay, I hear you say, but this bike is just a smaller-engined version of the mighty 916. Surely the 748 can only ever be a less powerful, less satisfying and only slightly less expensive version of Ducati’s red rocket? That’s pretty much what I thought until I rode the 748SP, but it’s not the whole story at all. Naturally the smaller bike is second best in some areas, particularly midrange acceleration, but it also has distinct advantages of its own.

Building a smaller version of the 916 flagship was a logical move for Ducati, who already had both 750 and 600cc versions of the air/oilcooled 900SS. That’s particularly true because, unlike the cheaper, twin-seat 748 Biposto, the race-ready 748SP was also designed to compete against the Honda and Kawasaki fours in the increasingly important 600 Supersport class. (It has already shown much promise, with wins in Italy and three top-six places at the opening European championship round at Hockenheim.)

The new capacity comes from a reduction in both bore and stroke to 88 x 61.5mm (same as the 750SS), while the engine’s bottom-end contains a lightened flywheel and a gearbox whose top four ratios are closer together. The Weber/Marelli fuel-injection system retains the standard single injector per cylinder, unlike the twin-injector 916SP, but the chip is reprogrammed, and this bike has a pair of carbon-fibre Termignoni cans poking from beneath its tailpiece. Peak power is a claimed 100bhp, produced at about 11,000rpm. That’s nine horses down on the 916 Biposto but 20bhp up on the 900SS.

Both 748 models share a basic chassis layout with the 916, including an identical blend of traditional steel frame which incorporates some slightly heavier gauge tubing on all models this year, to combat slight flex in the airbox area and single-sided alloy swing arm. The pair of multi-adjustable 43mm Showa upside-down forks is the same, too, but in place of the same firm’s shock the SP has an Ohlins unit. There’s a change in braking, too, where the SP’s fully-floating 320mm Brembo discs are made from cast iron, rather than steel, and the four-piston calipers are plumbed with braided hose.

Pity the poor stylist who eventually has to try and improve on the shape of Massimo Tamburini’s masterpiece. Ducati have wisely left well alone with the 748, whose bodywork differs only in colour from that of the 916. Having greeted the downsized desmo with less enthusiasm than I normally find for a hot new Ducati, I’ll admit to being won over virtually at first sight. In sunlight the yellow is just gorgeous, and gives the new bike an exclusivity that the all-conquering 916 relinquished months ago. When you climb astride the bike and drink in the details, everything else is every bit as good. The Ducati feels low and narrow, and if anything seems to weigh even less than its 200kg. Your eyes meet the broad fork-tops, the transverse-mounted steering damper, the 300km/h speedo and matching tacho redlined at 11,000rpm, the low screen. Then you hit the button and the SP comes instantly to life with an exhaust blam that makes you wonder how the hell Ducati ever got this bike homologated. (Answer: they didn’t. The carbon cans are in addition to the standard silencers, and come in a box for track use only.)

First impressions, after picking up the 748 in town, were of a riding position that felt typically racy and uncomfortable at slow speed; of the light, easy operation of clutch and throttle; and of the Ducati’s surprisingly docile behaviour at low revs. The 748 is certainly no city bike, but it pulled from below three grand even in top, felt slightly smoother and more manageable than the 916, and was generally less trouble than I’d expected.

And as soon as the SP hit the open road, it came thrillingly to life. With the throttle wound open and my left foot working hard to keep the tacho needle above 7000rpm, the Ducati was seriously fast. At ten grand, where the 916 would have been finished, the 748 was still motoring towards the 11,000rpm redline, its engine’s power pulses hardening to a drumming noise that all but drowned even the snarling exhaust note. Ducati estimates the top speed at around 155mph, and the SP will probably have a slight edge on the CBR600F and ZX-6R in a straight-line shootout.

Of course, there was nowhere near as much of the delicious midrange torque that helps make the 916 so enjoyable and easy to ride fast. Below 6500rpm the SP pulled cleanly but gently, building the revs slowly before it suddenly took off not unlike the 600cc fours against which it was built to compete. That made the 748 more demanding to ride, requiring plenty of input from the pilot. Approaching a slight bend with a gentle dab of brakes, the 748 needed a down change where the bigger bike would have stormed forward again without.

From slow speed there was still enough midrange grunt to lift the front wheel with a first-gear flick of the wrist, but riding fast on the 748 was certainly harder than on the bigger bike. On a busy main road, for example, overtaking a line of cars required frequent stirring of the gearlever, rather than a lazy roll-on of the throttle. On the other hand the greater effort and concentration required to get the best out of the 748SP made for even more fun on a winding road, where the Ducati rewarded slick shifting and aggressive cornering with a very rapid rate of progress. That of course was partly due to the chassis, which was every bit as taut, well-controlled and generally ace as the 916’s and a little more so besides. Suspension at both ends was decidedly firm, which made for a harsh ride over big bumps, but on smoother surfaces the Ducati was superb. The unchanged front end required a fair nudge on the bars to flick the bike into a sharp bend, but once there it felt utterly planted and totally under control. At the rear, the SP’s Ohlins shock was just brilliant, supplying infinite feedback about exactly what the fat, 180/55-section rear Pirelli Dragon considerably wider than the 600cc four’s rubber, and superbly grippy was doing.

Braking power from the big iron Brembos was excellent, too, with heaps of controllable power and none of the sponginess that 916 anchors have been prone to. (The SP also gains span-adjustable hand levers for both brake and clutch.) Like the racebike that it almost is, the 748SP responded near-perfectly to every rider command, whether I was howling the front tyre into a tight bend, carving through an empty roundabout, or simply burying my head behind the screen for a brief and nerve-wracking flat-out blast on the over-policed A3.

Throughout the test the SP didn’t put a wheel out of place, though this bike, like many others, has already suffered problems with its regulator/rectifier unit. That fragility apart, the Ducati is well-built and superbly designed. At £11,500, only £500 less than the 916 Biposto, it’s also undoubtedly expensive; not to mention uncompromising, uncomfortable and demanding. But I simply can’t think of another bike that would have been more fun especially on a long, hot summer day, with miles to cover and no particular place to go. There are also very few that would have been faster and then not by very much. All of which goes to show, if anyone was in any doubt, that motorcycles can’t be judged on paper particularly dyno sheets alone. Immediately after riding the SP I was sure that it had ousted last year’s 916 from top of my personal list of all-time great roadsters. The 748 is newer, rarer, yellower, better braked, more trick so who cares about the loss of a bit of straight-line speed? Now I’ve calmed down a little I’m not so sure. But the fact that the SP is up there challenging for top spot is an indication of just what a fabulous bike it is.

Get Ducati motorcycle insurance for the Ducati 748sp.