The original Ducati Diavel redefined the performance cruiser, this latest one does it again

Until 2011 the idea of a V-twin cruiser with the sophistication and performance of an exotic superbike was simply ridiculous – but Ducati did it anyway with its first, and astonishing, Diavel 1200.

Now the Italian exotica experts have done it again. Its new 1260 version may share the same muscle-bound poise and aggressive attitude of its predecessor but virtually every component, from its enlarged engine to its new colour TFT dash is new and improved. While in this ‘S’ trim, it even gets top spec Ohlins suspension front and rear, track-standard Brembo M50s and more…

In short: it’s definitely not your usual lumpy, rustic cruiser – and for the most part, that’s brilliant.

From the moment you swing your leg over the swish saddle and reach forward over the carbon and milled alloy, the Diavel, as before, is no conventional ‘chrome and cast iron’ cruiser.

Your eye line is confounded by the race-style dash and gold Ohlins fork tops, you’re dazzled by the multi-function, backlit switchgear and the Diavel’s whole posture is more an aggressive hot rod or stretched super naked than traditional, laid back custom.

But there’s enough ‘cruiser’ to convince, too. The fat back tyre has the same 240-section as before. The upright riding position has hints of cruiser, too, and the Diavel’s slightly kicked-out front end cast a spaghetti western style nod to the traditional custom bike as well.

In truth, of course, all of that was the case before. The Diavel’s always been a sort of squashed and stretched super naked that, thanks to Ducati’s brilliance, manages to perform and handle like a sports bike despite its cruiser dressings…

Instead, what truly sets this new 1260 apart is two-fold: one, a host of mechanical and geometric changes that subtly improve all round ability; and, second, and especially in S trim, a significant step-up in specification, electronics and equipment with the result being more like the Starship Enterprise than a SoCal Street Glide.

Firstly, the use of the enlarged, VVT engine from the Multistrada has also brought with it an all-new frame with slightly sharper steering geometry, shorter swing arm, repositioned shock and remounted twin radiators. This in turn has led to updated bodywork which, in S trim, now also features cornering LED riding lights. All that said, though, you’d probably only notice the extra grunt and slightly sharper handling by riding old and new ones back-to-back.

But in the second respect there’s no missing the changes. From the moment you begin to navigate the slick new TFT dash via the equally swish backlit switchgear it’s clear this new Diavel’s moved forward a generation. There’s now three customizable modes (100bhp Urban, soft 160bhp Touring and sharp Sport), traction control, cornering ABS plus, in this S trim a new auto-blipper/quickshifter.

From the saddle it blasts along like a dervish but with the secure assurance only the best electronics bring. While in the corners, while still not quite a true sports bike (there’s only so far Ducati’s magic can go), the new Diavel confounds its length and broad back tyre to sweep and dart far easier than any expect. The brakes, meanwhile, are simply brilliant.

That said, it’s still not perfect. Sport mode leaves the throttle so sharp it actually grates – I guarantee most owners will leave it in Touring. The fueling, off a snapped throttle, is imperfect, the quickshifter is not as smooth as hoped for, while the new switchgear and some details seem a little flimsy. Maybe that’s the price of a sports cruiser slathered in carbon and sophistication…

The rest of the time, though, the new Diavel’s brilliant: comfortable, reasonably versatile, astonishingly equipped and class-meltingly fast. Who said you needed a sports bike to enjoy sophistication and speed? 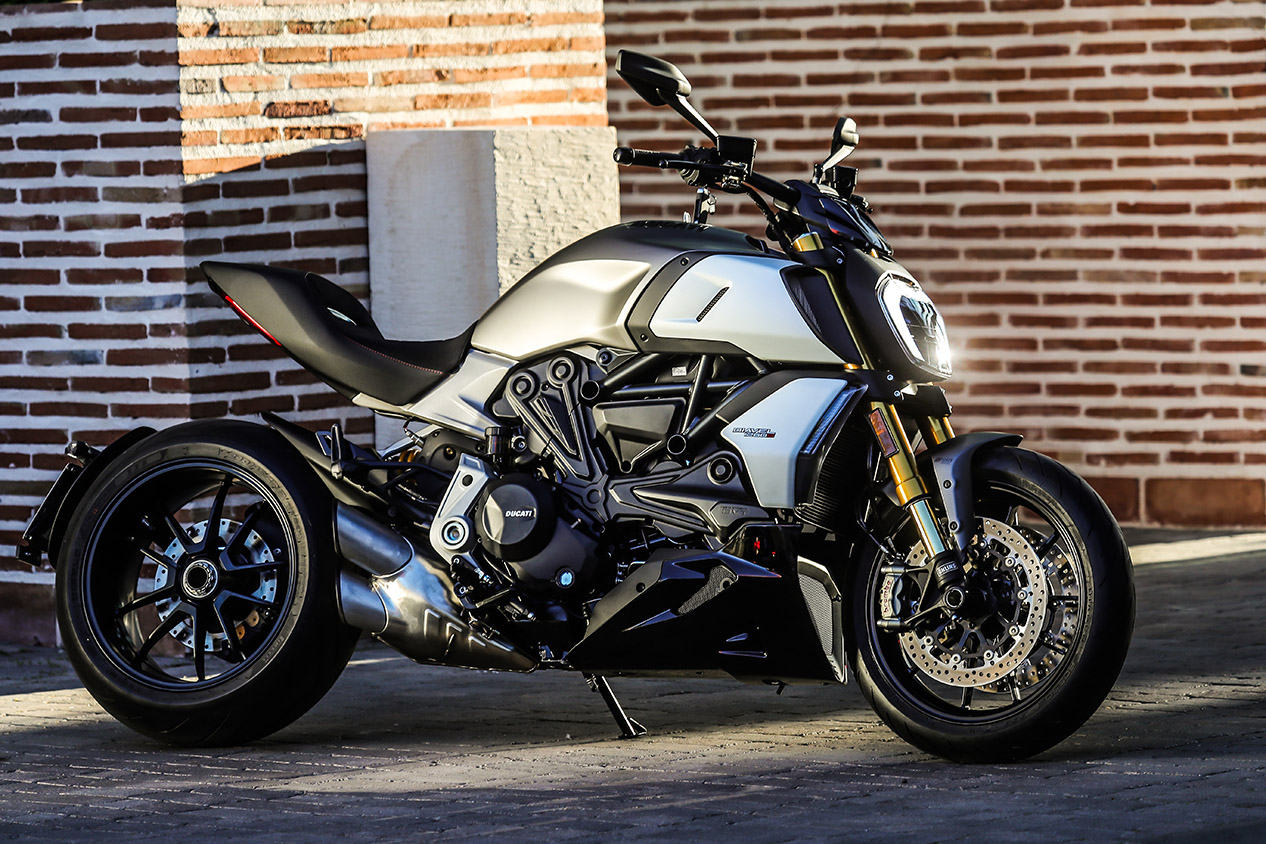