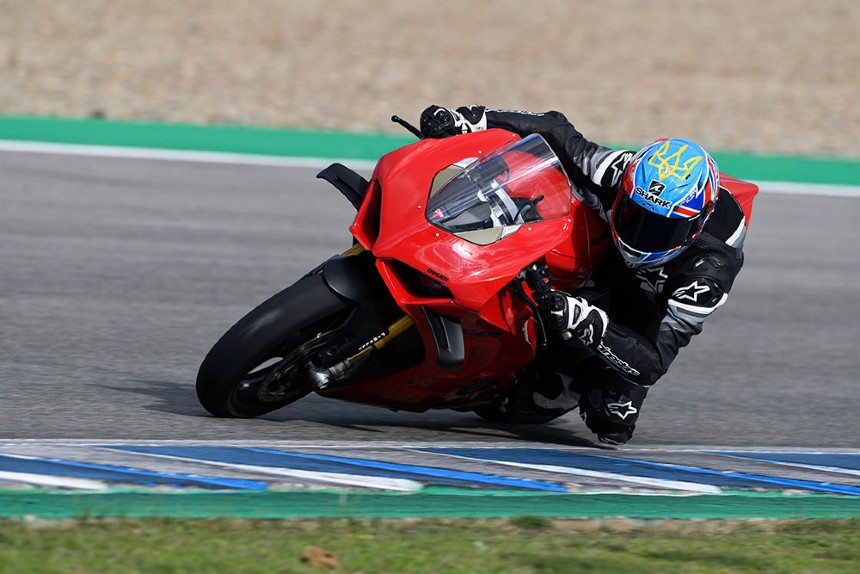 Ducati’s Panigale V4S gets faster, sharper and smarter for 2022. So, is it the ultimate road-legal superbike, or is it too much to handle?

It’s fair to say that Ducati’s Panigale V4 has always been an impressive machine in so many different ways. Thanks to a mixture of breathtaking power, incredible handling and top end components it’s been an absolute weapon since its release in 2017, but on the flipside it’s never been the easiest beast to tame, or indeed to get the most out off. No other litre bike on the market makes you feel as special, but unless you happen to be a professional racer, many were easier to ride and faster over a lap, with less input required from the rider.

In 2019 Ducati addressed that with some welcome updates to make their flagship Panigale that little bit more user friendly, and it made the Panigale V4S one of the best motorcycles I’ve ever had the pleasure of swinging a leg over – and now for 2022, it promises to be even better. This is because they’ve made a whole host of changes, which Ducati tell us make the V4S faster round a lap for every ability of rider - from a relative newbie to their factory MotoGP test rider, Michele Pirro.

For starters, they’ve been hard at work on that monster of a 1,103cc Desmo powerplant, gifting it a new silencer and oil pump, which gives the latest V4 a power hike of 1.5bhp. That might not sound like a great improvement, but it now pumps out 215.5bhp and 123.6Nm torque (with a whopping 100Nm available at 6,000rpm), which is pretty mighty if you ask us.

Oh, and if that’s not enough you can stick the aftermarket exhaust on and end up with 228bhp. More pertinently though (especially if you’re planning to ride one of these on the smaller, compact UK tracks), Ducati have equipped the ’22 Pani with a new gearbox setup, which has been derived from their homologation special V4R.

This means that they’ve lengthened first and second gear by a considerable amount and reduced the jump in ratios between the two, which will make first gear much more accessible to use on track in tight hairpins, with gear changes up and down the box smoother too. They’ve also lengthened sixth gear, which gives an extra 5kph top speed.

It’s not just about engine improvements though, as Ducati have also been hard at work on the chassis side of things, to improve the Panigale’s on-track characteristics. They’ve done this by not just moving the swingarm pivot 4mm higher for better anti-squat and a more stable feeling under acceleration, but they’ve also given it the latest and greatest Öhlins NPX 25/30 electronically controlled forks. 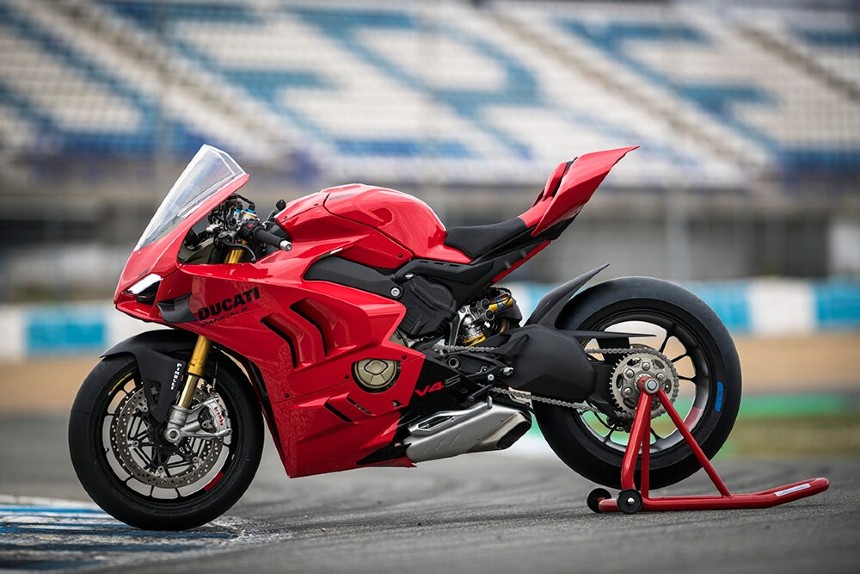 These are now pressurised (like you’d find on a high-spec race bike) and have an increased stroke of 5mm to give slightly more travel than before and allowing for springs that are 0.5kg softer than before, for better feedback all round. This is complimented by an Öhlins TTX36 rear shock, steering damper and the poshest Brembo Stylema calipers available.

They’ve then thrown all this together in a more aggressive looking package, which has been heavily thought out for both function and fashion. The wings, although more compact and thinner than before still produce the same load as the previous generation, while there are more cut-outs on the fairing for cooling; there’s even a little piece cut out of the left-hand fairing in order to cool the quickshifter sensor.

Alongside this, the seat and fuel tank have been redesigned to offer the rider better movement on the bike and better anchorage with your legs under heavy braking and acceleration, alongside an extra litre of fuel in capacity.

This is all tied neatly together with all the tech you’d expect on a £26k, flagship sportsbike; a six-axis IMU with all the riding aids under the sun, which is complimented with a refined TFT dash. For the first time ever, there’s also a new rider mode which allows the engine to its fullest with absolutely no electronic interference, at least as soon as you make your way out of first gear.

The Panigale V4 has been an impressive machine since its inception, and with all these subtle tweaks, it looks set to be far better than ever. So how does it perform, and does it warrant a £26,000 price tag? We were lucky enough to ride one at Jerez on the international press launch to find out.

Typically, on the day we brought the weather with us which meant there was a huge downpour overnight, and a wet track to start with. Although not ideal on a 215 horsepower Panigale, it actually gave me a great opportunity to test out the V4’s wet mode, and see how docile the V4S could be, given the circumstances.

In wet mode the engine is limited to 150hp and the throttle map is much smoother; so smooth in fact, I couldn’t believe I was sitting on top of a Panigale V4S. It so gentle, so soft, and so easy, and the electronics package is incredible, catching every little slide without being too aggressive.

But, thankfully, after a few wet sessions and a long lunch break the sun came out, and it was the dry time where we really got to feel the difference with the new Panigale V4, and what a difference it is. In a higher power mode but with the soft throttle response, the V4S didn’t feel aggressive or hard work on the power but like a tamer sportsbike, until I hit the brakes for the very first time.

Whatever wizardry Ducati have played with those big, Brembo Stylema brakes and the Bosch ABS is incredible, because it offers an insane amount of stopping power, that is accessible straight away thanks to the downforce created by those wings and with little to no ABS intrusion. It’s not just good into a corner though, as in the corner is where the real magic happens. 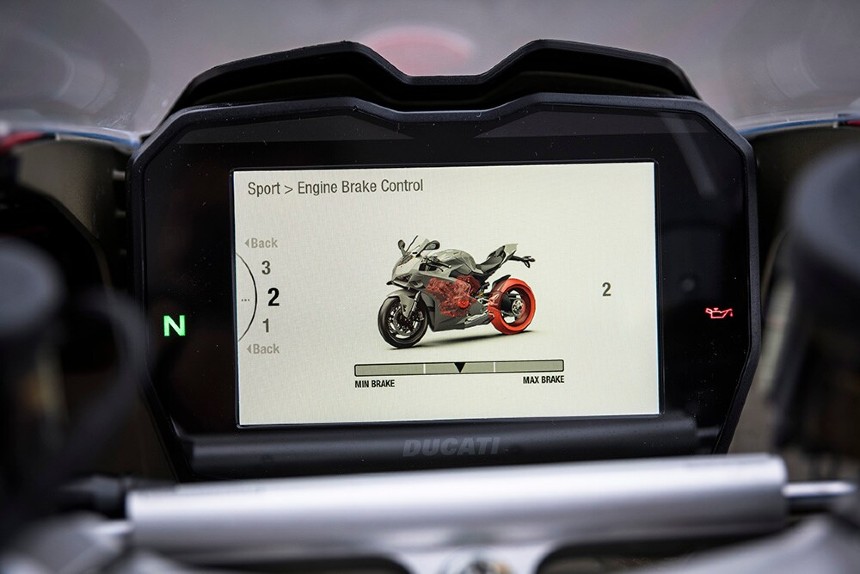 Without exaggeration, the Panigale’s front end has to be one of the very best standard bikes I've ever sampled, with those new forks offering the most incredible feedback. It’s so devastatingly accurate that even when going wide, you can really lean on it and it just pulls towards the apex, with no arguments whatsoever. It really is a testament to the development team and their test riders.

I have to say though, although the V4S felt fairly tame in the softer engine mode, a few sessions in the full-fat, Race A mode changed everything. The Panigale is still a Panigale; it's an absolute animal, that fires out of corners with incredible urgency, offering bucketloads of torque in the mid-range, and an engine that revs higher, harder and faster than a roadbike ever should.

From the sound to the incredible responsive throttle, Ducati really have got that engine nailed, and with the changes they’ve made to that gearbox, it really has got even better. I rarely use first gear on track unless I absolutely have to but by lengthening the gears and bringing them closer, false neutrals are a thing of the past. I’d go as far as saying that it feels like a race modified superfinished race gearbox, and on UK tracks like Cadwell and Oulton, it would make a monumental difference in those really slow corners.

It also helps that it has one of the slickest quickshifter and autoblipper setups in the game. The updated dash is really nice too, especially in Race Pro as not only does it show sector and lap times in real time, but it also lights up whenever rider modes are working, which is really smart when leaning on the traction control.

Ducati have also been working hard on the ergonomics of the new bike, and although those changes in the seat and tank have made a little difference, it just didn’t quite hit the spot for me. In all honesty, my only niggle with the V4S is the way that the new tank is shaped; it’s been made to be easier to hold onto under heavy braking, but with my short, 29” legs I struggled slightly to get them gripping mid-corner - although I do feel like it would suit a taller rider better, especially when picking up the throttle at big lean.

It's also worth mentioning that although the big Panigale is a little easier on the body than before, it’s still a physical beast to muscle around. During a session you really have to work for it, and after a day of riding it does take its toll, compared to some of the softer, easier to ride sportsbikes on the market.

With every update, Ducati’s Panigale V4S just keeps on setting a new standard, delivering one of the most exciting riding experience a standard machine has to offer. We even got to see Jorge Martin and Johann Zarco nailing it around, and with just a set of slicks, you can see how special this bike is, and how hard it can be pushed. Yet the beauty is, even at a regular trackday pace it makes you feel like a MotoGP rider.

For track riding, this isn't the easiest bike to ride fast, and you could probably go faster on a competitor as standard, but for me, this is the ultimate sportsbike because of how poised, focussed and impressively fast it is. And with these subtle tweaks for 2022, Ducati have made an amazing machine, even better.