Significantly restyled with all-new bodywork, a striking stacked twin headlight arrangement and MotoGP-aping mini wings, it certainly looks sharper than its predecessor. With some claimed improvement from its engine and chassis, I was keen to test the new 1000, especially as the press launch test was going to be held on Yorkshire roads, and include a tight and twisting hill climb. 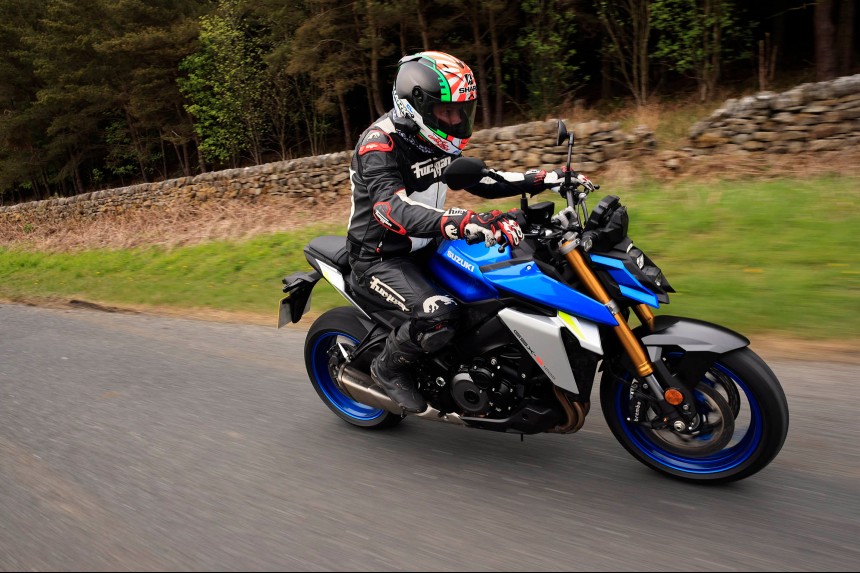 A wet weather forecast prompted a change to the schedule, and it was a case of being chucked in at the deep end with some runs up the challenging Harewood Hill Climb coming first. The experience showed the Suzuki in a good light. The narrow track has little run off, and needed an easy to manage package to negotiate it safely.

Luckily, the GSX-S is just that and its slightly more powerful, 150bhp, GSX-R1000K5-derived engine never felt intimidating. Former British superbike champion John Reynolds advised using second gear for the whole lap and, thanks to the very broad spread of power and torque, the in-line four pulled strongly and predictably from start to finish lines. It was certainly fast, but never felt a handful.

Really easy to use, even when it’s revved harder, the Euro 5-compliant motor has new cams, valve springs and smaller throttle bodies for this year, along with some revisions to the airbox, exhaust, clutch and gearbox, even though the lineage can still be traced back to the iconic K5 of over 15 years ago. The mods help improve the midrange and flexibility of what was already recognised as a notably grunty and useful motor. It justifiably drew praise from all the testers in attendance. 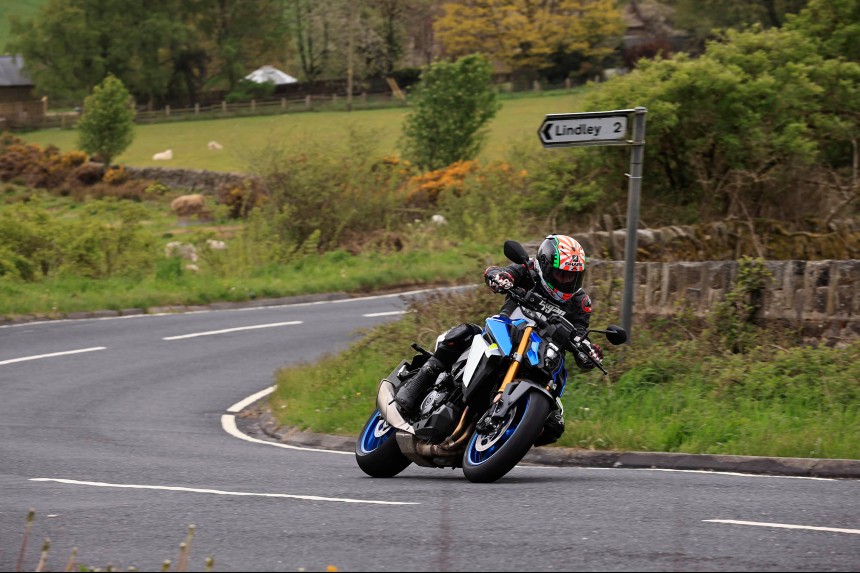 The standard fitment quick-shifter also helped the flow of the lap, and both the new five-way adjustable traction control system, and three-option riding modes made it feel safer to circulate quickly. Mode B was the popular choice as throttle response is arguably a little too sharp in A.

Perhaps more remarkable was the Suzuki’s ability to handle the circuit’s continual succession of tight corners. Despite a lethargic-suggesting 214kg wet weight, hauling the 1000 naked through the hairpins and chicanes wasn’t the bicep-busting experience you might expect. Geometry for this year’s model is unchanged, and mods to the rest of the rolling chassis are minimal.

They include revised rear shock internals, new Dunlop tyres, and more relaxed riding position courtesy of 23mm wider handlebars, which sit 20mm nearer to the rider. On paper, and down the pub, there’s not much to boast about there but the fact is the new Suzuki feels sharp and stable and I was happy to hustle it.

Charging in, through, and out of the corners brought no complaints from me, with the bike feeling especially secure under heavy braking, something the Brembo calipers can generate readily and predictably. It really is a safe and easy-feeling motorcycle on track.

The story continued out on the road too. I’d argue that Yorkshire’s finest routes can throw up just as many challenges as a hillclimb track thanks to their twisting and very undulating nature. Add the unpredictably of wildlife, traffic and, as I would discover later in the day, the weather, and a manageable bike will always be viewed as a bonus.

Yet again, throughout my 100-mile test ride, the Suzuki played its trump card of manageability. Even when the roads were soaked by rain later in the afternoon, I always felt I could trust the Suzuki.

It might have more than ample power, which can generate impressive speeds very willingly, and a fairly basic and quite weighty chassis, but I never had a single moment of worry, even when pushing on. It’s a really good feature of the bike and one that would be especially welcomed by newcomers buying their first big bike, or anyone getting back into biking. 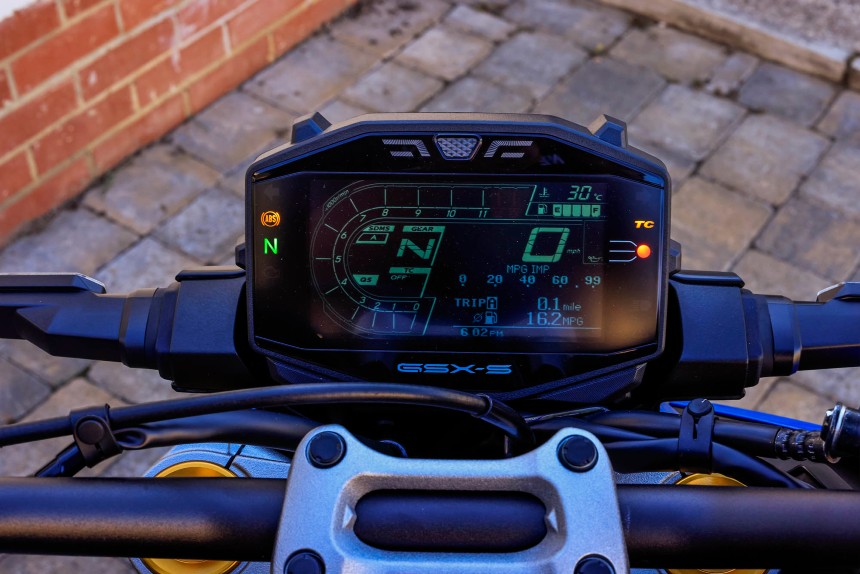 Those wanting to take on longer rides are quite well served too. OK, so it’s not a touring motorcycle and things can feel a bit windy at speed thanks to the lack of wind protection, and some may find the footrests a little too high for longer-term comfort. But overall, kicking out 100-mile stints doesn’t feel strenuous.

Commendable though the worthy GSX-S is however, one thing it lacks is a bit of desirability and wow-factor. Like many Suzukis of late, it can feel really good to ride, but certainly not great or especially stimulating. It’s hard to pinpoint exactly why this is the case, though maybe it’s simply because it’s not quite new and fresh enough.

Proven though it might be from a dynamic point of view, the bike’s spec isn’t that high by 2021 standards. With a £11,150 on the road price it’s a good chunk of change cheaper than the fancier and more powerful supernakeds out there and, arguably, you get what you pay for. Personally I’d say it needs to be slightly more flashy and appealing even for that money, but it’ll be really interesting to see how well it’s received by the market. 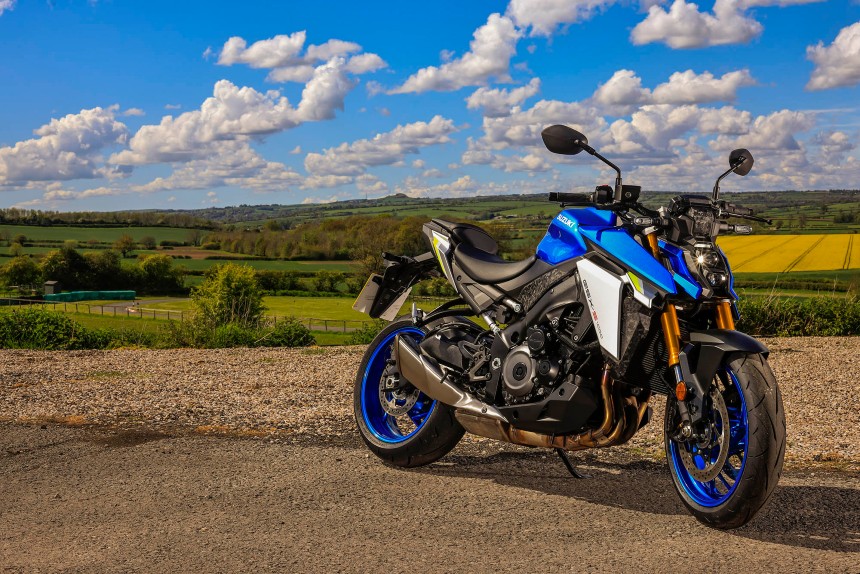