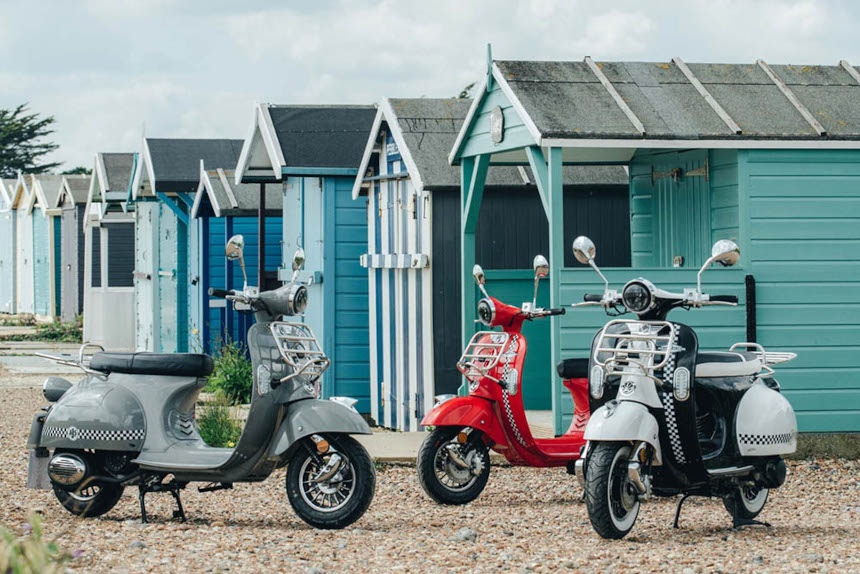 When it comes to getting around town, there really are fewer options better than a learner legal scooter. Easy to buy, cheap to run and simple to access, thanks to the fact you can ride them after a day’s compulsory basic training (CBT), they offer plenty of flexibility and cost saving opportunities in today’s environment of expensive fuel prices and public transport woes.

Scooters come in all shapes and sizes, and some of the coolest are the various retro models. These usually ape the classic styling of Italian scoots from the Swinging Sixties, but have the benefit of modern technology and build standards to rely on.

There are so many of these models to choose from, but here are 10 of our favourites to cater for all tastes and budgets. 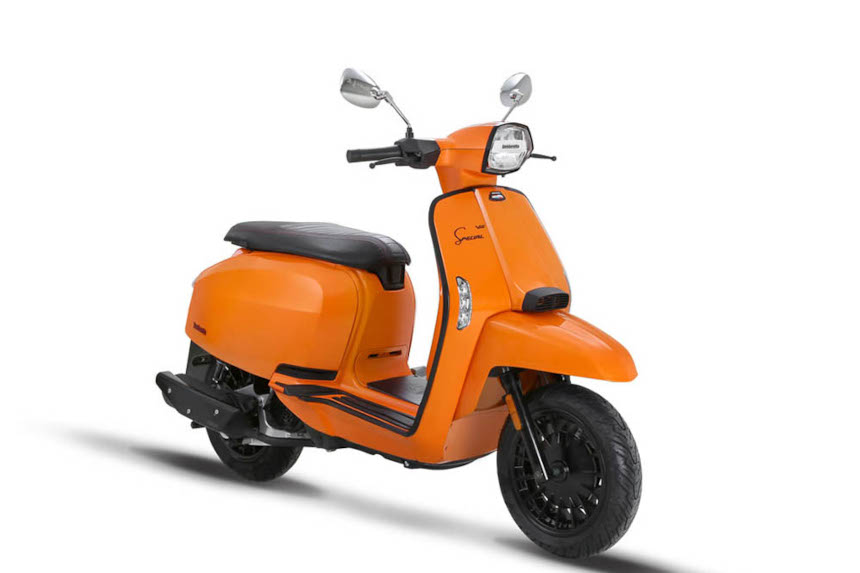 There are two iconic Italian scooter brands: Lambretta and Vespa.

While Vespa has been an ever present since 1946, Lambretta has had a more tumultuous history, whacking out T-shirts but not much else from 1972 until a few years ago, when scooter production resumed in India.

The V series comes in three traditional engine capacities: 50cc, 125cc and 200cc, and although the styling is straight out of the Sixties, they now use four stroke engines and twist and go, rather than geared, transmissions. There are also modern touches like LED lights and neatly concealed disc brakes. 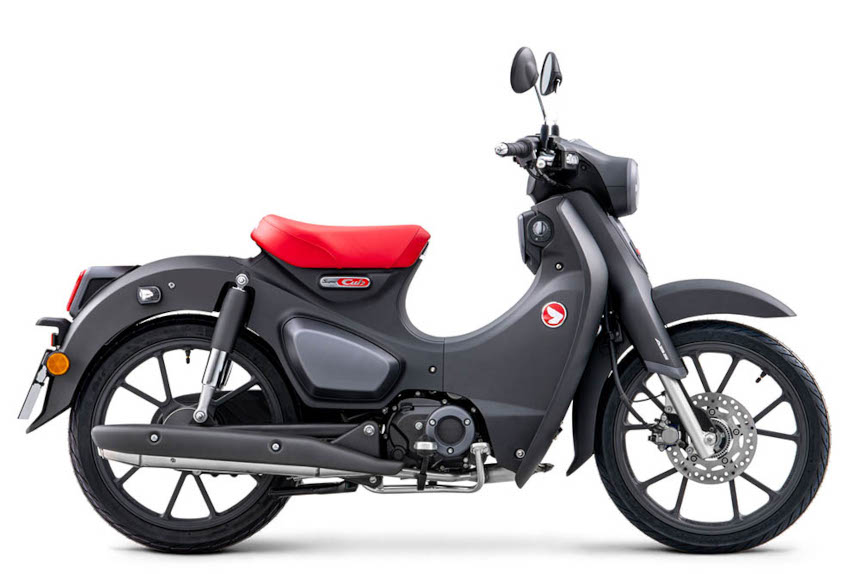 Ok, ok. We know it’s not actually a scooter and that it’s technically a motorbike (thanks to the mid mounted engine and footpegs, rather than floorboards) but there’s nothing more classically styled than the Honda Super Cub, which is the latest version of the most sold motorcycle of all time.

Let’s be honest, the average person on the street won’t know the difference between the Super Cub and a twist and go scoot anyway. It’s cute, fun and a bit more engaging to ride than the average scooter – thanks in part to the semi-automatic gearbox – although the layout makes is less practical than a scoot due to the lack of underseat storage. 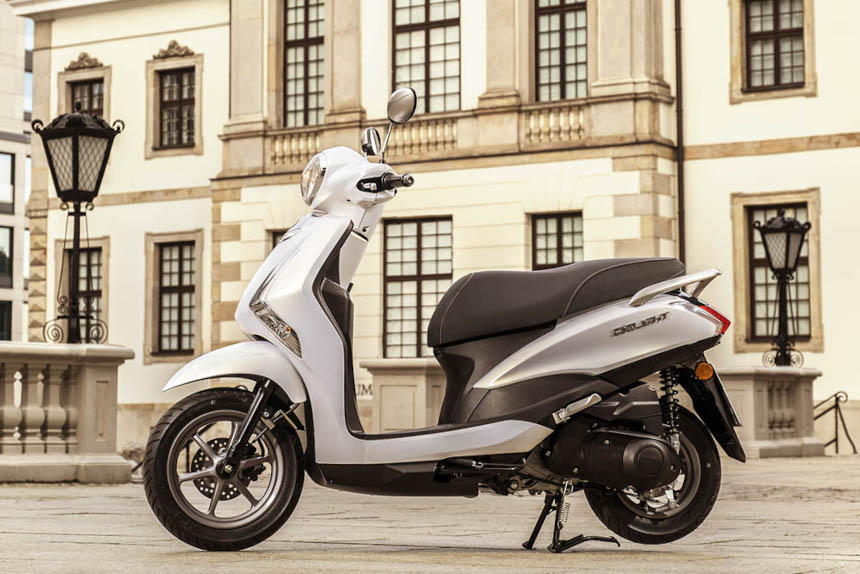 Is this really a retro/classically styled scooter?

Hmm, possibly not, however it is a modern scooter with a hint of retro style, and we like that. And it has plenty of appeal for riders looking for a brand name model that’s thoroughly modern, but with a touch of the classic about it thanks to the soft lines.

The oddly punctuated D’elight is one of the easiest machines to ride. The small wheels contribute to the low seat height and light weight, and there’s a big underseat storage space to add to practicality. It’s cheaper than most Japanese scooters too. 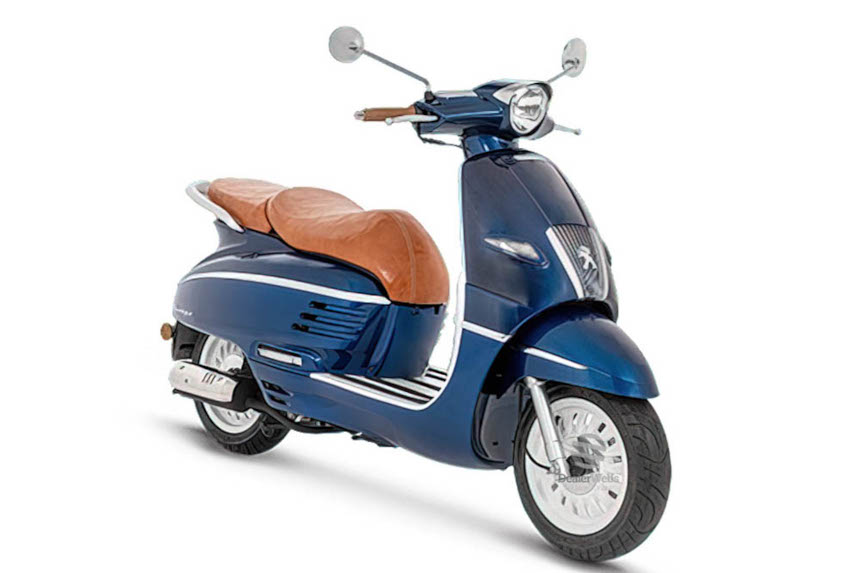 Although Peugeot’s scooter division is now completely separate to the car company bearing the same name, the Indian run two wheeled division’s range continue to provide a dash of gallic flair to the scooter market.

With a heritage going back to 1898, Peugeot can rightly claim to be the world’s oldest scooter manufacturer. The Django, which is also available as a 50cc moped, combines modern tech with design cues taken from Peugeot’s own S55 from 1955.

There are a variety of colour options, but for our money the base blue model arguably offers the most traditional looks thanks to the chrome mirrors and contrasting seat. 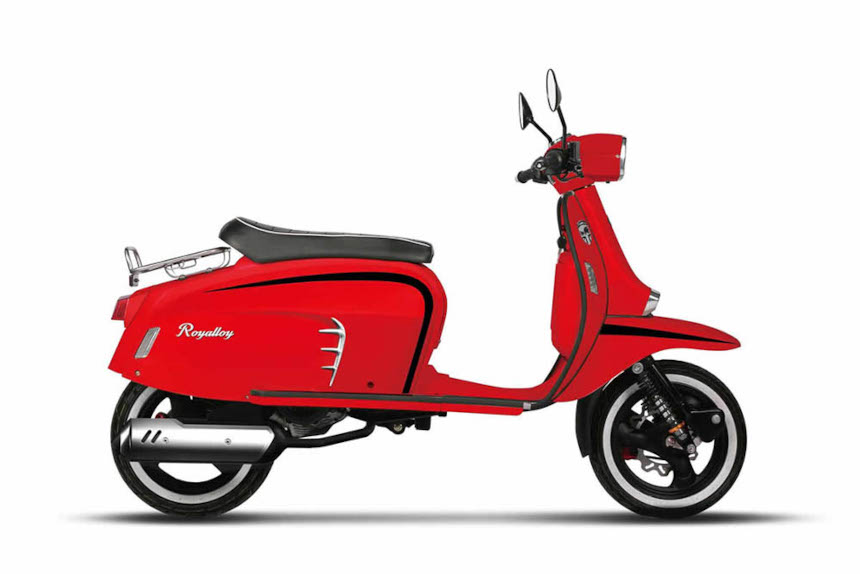 Royal Alloy is a fairly new British brand with a range of scooters inspired by classic Lambrettas.

The wide range includes scooters of up to 300cc, with a number featuring traditional metal bodies, but the GT125 is the entry level model with plastic body panels, a 9.7bhp air-cooled motor and modern automatic CVT transmission.

There are a range of vibrant single and two tone colour options, and provide a perfect platform for Mod-style modifications. 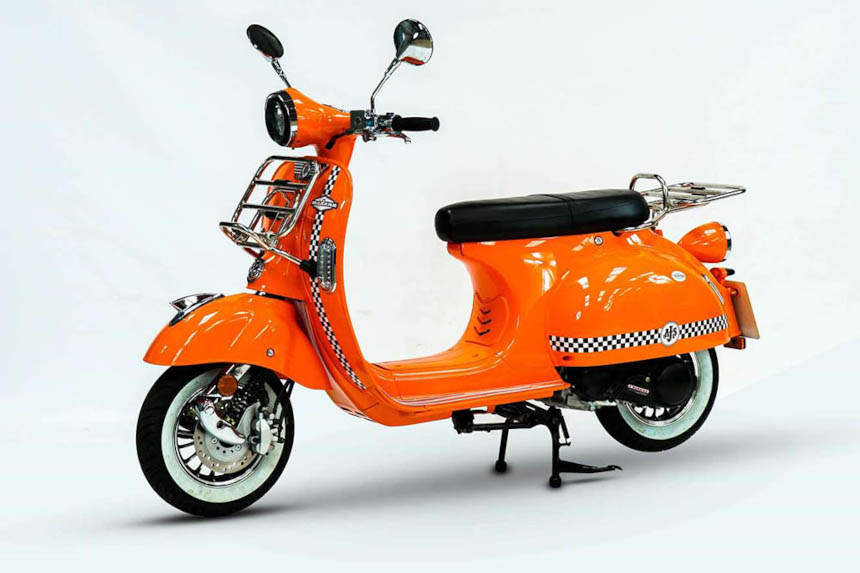 AJS is a classic name from British motorcycling history. These days the brand is used to badge engineer some Chinese built models, and the Modena is a budget set of wheels with plenty of knocked off Italian style.

It’s got a modest 7bhp engine but is a stylish machine if you want that Mod look, with the chrome luggage racks front and rear and whitewall tyres on the two tone versions in particular evoking memories of Brighton. 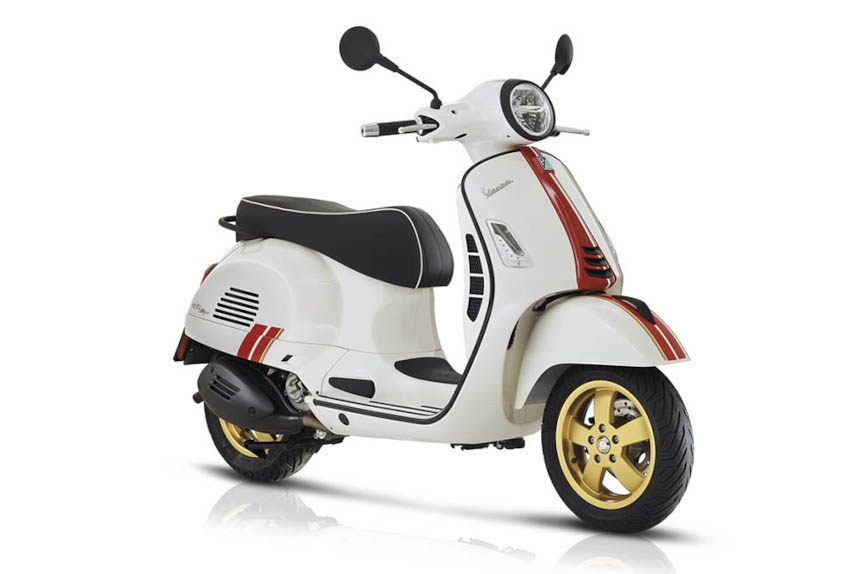 One of the two grand old Italian scooter brands, Vespa has reinvented itself much as Mini has in the four-wheeled world.

The current Vespa range are thoroughly modern in their mechanicals and technology but take styling cues from those iconic bikes of the 1960s.

Unlike the originals, which were conceived as cheap post-war transport, today’s Vespa is right at the top end of the scooter market.

The £4000 Primavera is the entry level model, but if you want to be king or queen of the scooter world, this GTS combines Vespa style in a even more fashionable and high tech package that comes in numerous funky colours.

There’s also a 300cc version for riders who have a full licence. 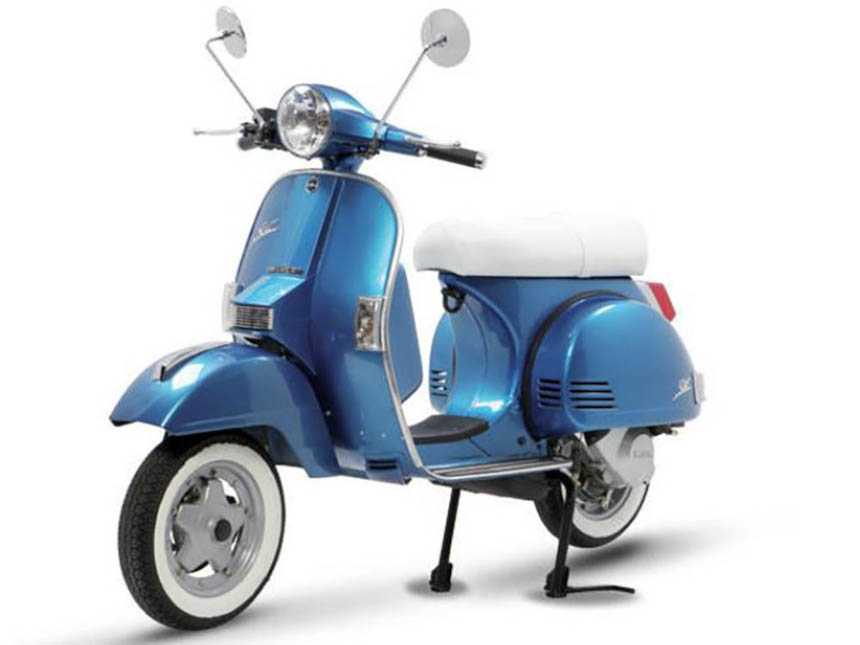 Ok, so the name might not be the most evocative, but the LML Star Auto has a pretty fair pedigree to back up with those authentic looks.

If it looks familiar, that’s because it’s based on Vespa’s PX models of the late ‘70s and early ‘80s. Indian company LML says that the Star was conceived in collaboration with Piaggio, owners of the Vespa brand, though the engine is their own fully automatic four-stroke rather than the old manual two-stroke of the original.

They’re something of a rarity over here, but come with a budget price tag and some decent reviews. 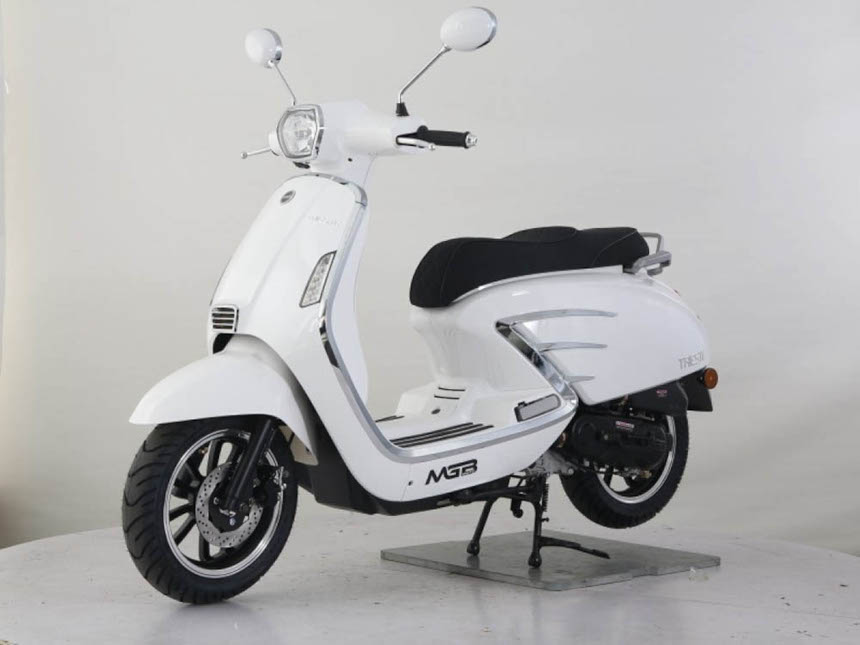 MGB is another one of those new British brands developing and rebadging scooters and motorcycles made in China, and while many of us will have heard horror stories of Chinese bikes with poor build quality and unreliable after sale support, it’s a fair bet that MGB should be one of the better brands.

That’s because the company behind it, MotoGB, is a very experienced importer whose other brands include Benelli and Royal Enfield.

The Trieste has Italian roots, being penned by Massimo Tartarini of Italjet fame, and it’s a tidy design which falls just on the modern side of retro. To be honest, it wouldn’t look out of place in a Piaggio brochure.

The swoopy rear is classic Italian scooter and we think it looks great. Although the spec is a little basic by modern standards, that’s reflected in the sub £2000 price tag. 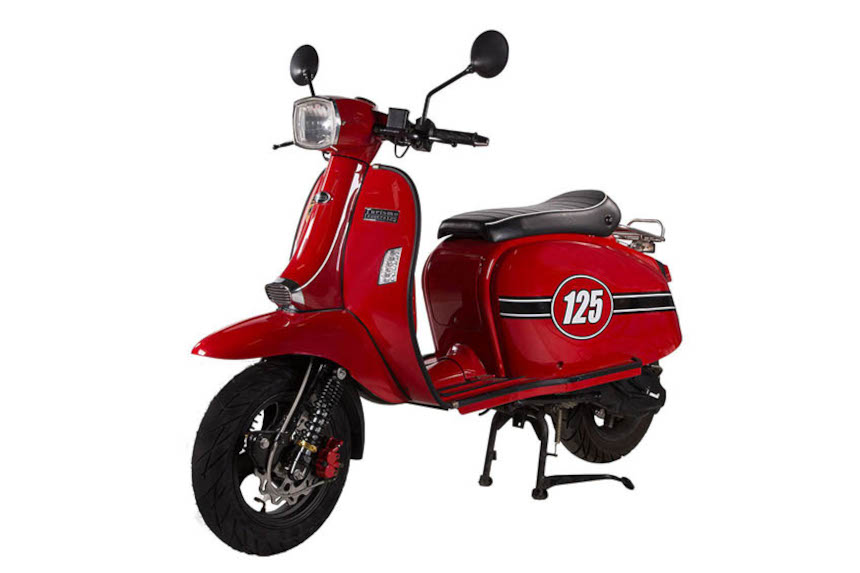 Like the aforementioned Royal Alloy, the Scomadi TL125 is another of those Italian influenced, British owned, Asian built Lambretta clones.

It utilises the same Hanway engine as the Royal Alloy and the differences between the two brands’ models are subtle – indeed there’s been a fair bit of beef between them in the past.

That appears to have been settled and although the company effectively closed shop during the Covid lockdown, they’re on the comeback trail in 2022.