Our experts have prepared these helpful guides in order for you to get the most out of your motorcycling experience.

Whether it’s a daily task like checking your tyre pressures, or help in laying up your bike for the winter, our team are here to help make your motorcycling safer, cheaper and above all more satisfying with some handy maintenance tips.

Looking for some hints, tips or inspiration on how to get the most out of your motorbike?From changing a tyre to buying a classic, our team of specialists are on hand to pass on their decades of experience with 'how to' guides and advice columns.

In a quiet, industrial district of Hawthorne, Los Angeles, hidden behind some hard-core security fencing is the home of what could possibly be the world’s most famous motorcycle. It certainly is for this weekend, at least.

This is the home of Arch Motorcycles, a company started and run by Hollywood actor Keanu Reeves, and renowned custom bike builder, Gard Hollinger. Together the two have been quietly building their own motorcycles using 2032cc, V-twin S&S motors, a high-spec of suspension and kit, and with the kind of detailed finish you’d expect to see on a £700,000 supercar.

I say quietly, but when you’re one of the world’s most famous actors, and a massive personality like Reeves, you can never do too much quietly, and the guys from Arch came out to the EICMA Show in Milan to reveal two more Arch motorcycles at the end of last year. 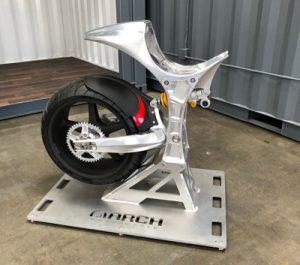 There are two more Arch Motorcycles on the way soon too – the single-sided swingarm 1S, an evolution of the beautiful KRGT-1, and the Method 143, a bike that uses a 2343cc motor making around 200bhp, has a unique carbon monocoque frame, carbon-fibre wheels and all billet aluminium bodywork planned for production a bit further down the line. Whatever you think of them in pictures you can’t help being blown away by the quality of the work when you see them for real.

And this weekend, a host of television adverts in conjunction with website builders Squarespace (see here) will see Reeves stood on top of one of his Arch Motorcycle creations surfing in the desert, while talking to himself on a KRGT-1.

The Arch KRGT-1 is an ultra-exclusive, high-end performance cruiser featuring a massive rear Michelin Commander II tyre, a handmade frame, and complete with the latest Ohlins FGRT forks built to Arch’s spec, and ISR brakes for 2018. The 2018 bike costs in the region of $85,000. Every year the bikes get tweaked so it’s a constant evolution.

All bikes are built to order and options, things like riding positions and finishes can of course be specified by the customer.

When you get the get met at the door of Arch by Hollywood Actor Keanu Reeves’ own Arch Motorcycle parked outside the front of the building, and then get greeted by the man himself, you know it’s going to be a good day. 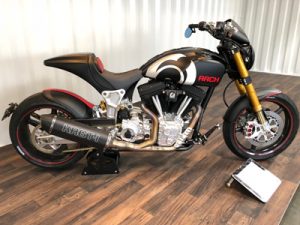 I first ran in to the Arch guys when they were over in the UK for the Goodwood Festival of Speed, and have stayed in touch with the crew ever since.

You couldn’t meet two nicer guys in motorcycling, and both Gard and Reeves aren’t playing at building bikes. This is their gig, day in, day out. And Reeves rides to work every single day, when he’s not away filming. His personal/development bike is parked gleaming in the California sunshine outside the front of the factory. It has done 12,000 miles in two years and still looks as good as new.

The set-up is impressive, pretty much everything is made and assembled in-house, there’s milling machines expertly operated by top man Ryan Boyd, and three assembly bays. There are laser cutters, a studio, frame assembly, welders, workshops, you name it. If you had to come to work every day to build your own motorcycle, this would be a pretty good place to do it.

Owners get a book with their bike, constantly updated with images as the build takes place, and become members of a very exclusive club with access to events through Arch’s partners like Michelin that money literally cannot buy. Even the Arch key to turn the bike on is factory cool. 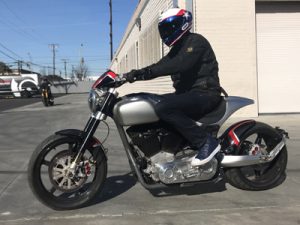 Gard and Reeves chuck me the keys, and along with friends of Arch, Vic and Heath, we line-up four Arch Motorcycles to head out for a blast up on the freeway past LAX, and down to the start of PCH-1. Hey, I’m not saying this is a comprehensive test. We went for a quick blast for an hour, okay, but hopefully it should give you a good idea of what they feel like.

The noise and presence of these bikes on the road is something I’ve never witnessed before.

They’re loud, not offensively, but loud enough to get noticed. Even when riding you can see the detail in the aluminium frames, the sun shining of the milled cases, the Arch motorcycle logo under the seat. It’s hard to categorise them against anything else I’ve ever ridden.

There’s so much grunt that at first you over rev it. We switch bikes and Gard says their sweet spot is from about 2000rpm to 3300pm. You don’t need to rev it any more than that, but it will if you want. There’s power when you need it, it’s progressive and man, oh so strong. 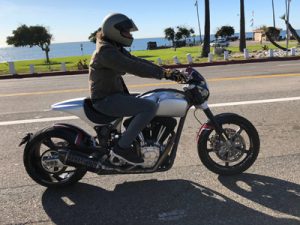 They make look long, but don’t feel it. You can feel the big rear tyre at first when you tip it I to a corner, but they get in the flow, and handle impressively. The Ohlins on the 2018 bike not only looks better, but rides better too, and the brakes on the 2018 bike feel more powerful, despite being similar calipers. The chassis feels stiff, direct, accurate. The whole package just works, and impressive feat for a new motorcycle company. Although, of course Gard Hollinger has been building bikes for longer than I’ve been alive.

We blast up and down a section of PCH-1 for an hour, swapping bikes, trading stories and having a blast, but too soon it’s time for take the bikes back and lock them away.

For now, take a look and enjoy the Arch Motorcycles Superbowl videos. I’ll be doing the same and telling my family: “I rode that bike, once.” 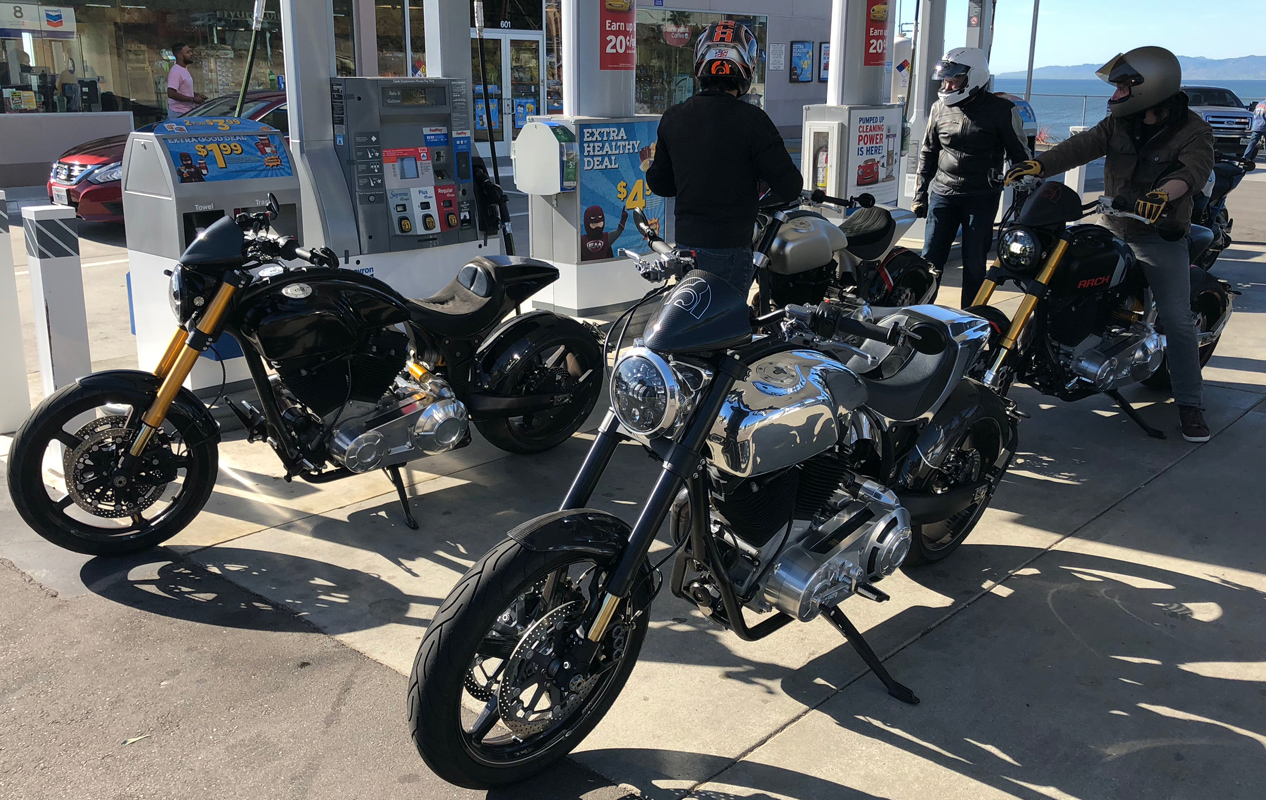 Get your free motorbike insurance quote »