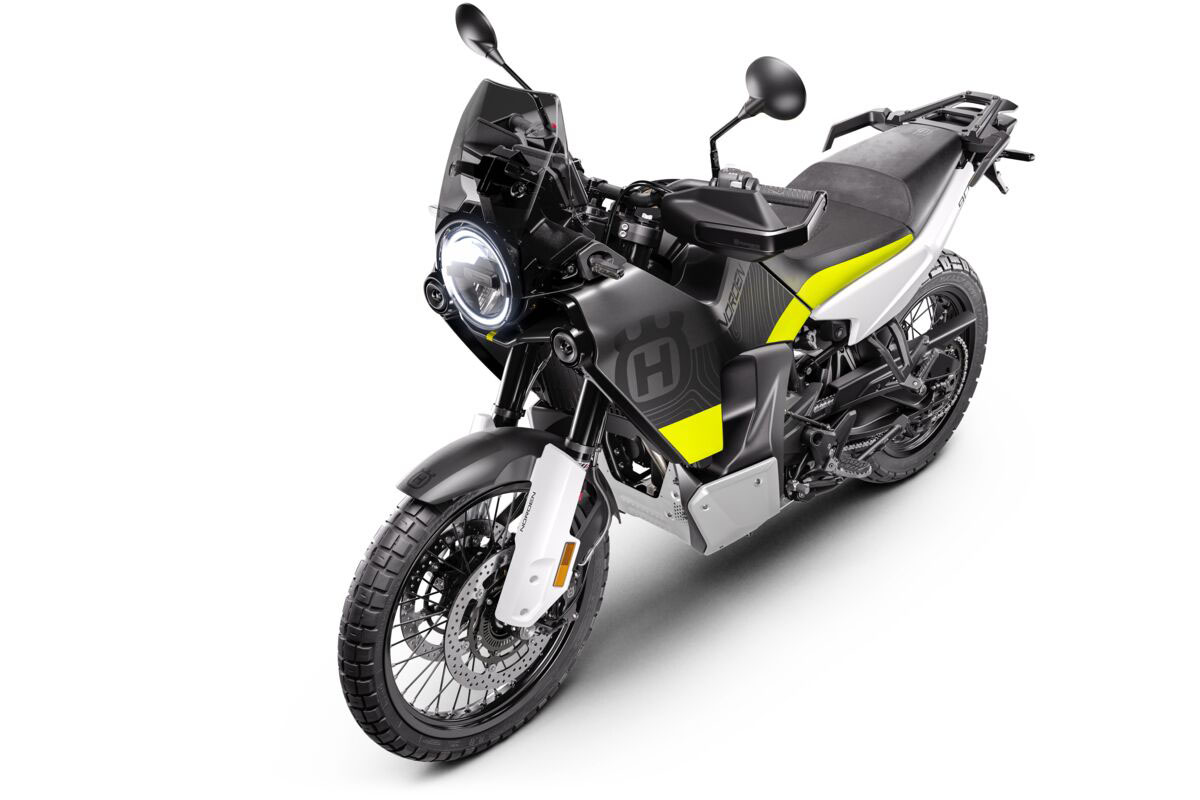 By now we all know the deal between KTM, Husqvarna and GASGAS. They share more than just a parent company. The Pierer Mobility brands use the same platforms for their models and, in turn, they are very similar in terms of model line-ups, specs and equipment. The Norden is no different. It utilises KTM's incredible 890 Adventure as a base, but Husqvarna have created the Norden to be not just an absolutely stunning looking thing, but a halfway house between the off-road focussed KTM 890 Adventure R, and the standard road-based model. So, is it the do-it-all machine they claim?

Looking at a spec sheet, it’s easy to see how Husqvarna sure have pitched it that way, even though it is essentially a KTM 890 Adventure at heart. The same 899cc parallel twin offers up 105bhp and 100Nm of torque and is housed in the same steel trellis frame as its orange cousin. In order to make it a decent road bike, it comes equipped with an 18 litre fuel tank, cruise control, autoblipper and quickshifter, lean angle sensitive and switchable ABS, traction control and three rider modes as standard, which are Street, Rain and Off-road. All of this is fed through a substantial TFT dash, which also connects to your smartphone.

But then again, the beauty of the Norden is that it’s not all about its ability on the asphalt, as it also comes equipped for the off-road too. For starters, the WP Apex suspension offers a whopping 252mm of ground clearance, and it has an off-road mode with pre-determined settings better suited to unpaved roads. There’s also the option of an extra ‘Explorer’ mode too, if you're serious about getting dirty. Coming in at £12,349, does the Husqvarna Norden 901 offer up an ample level of off-roading ability, while still offering a serious knack for the tarmac stuff too? We spent a few weeks, off and on-road, to find out… 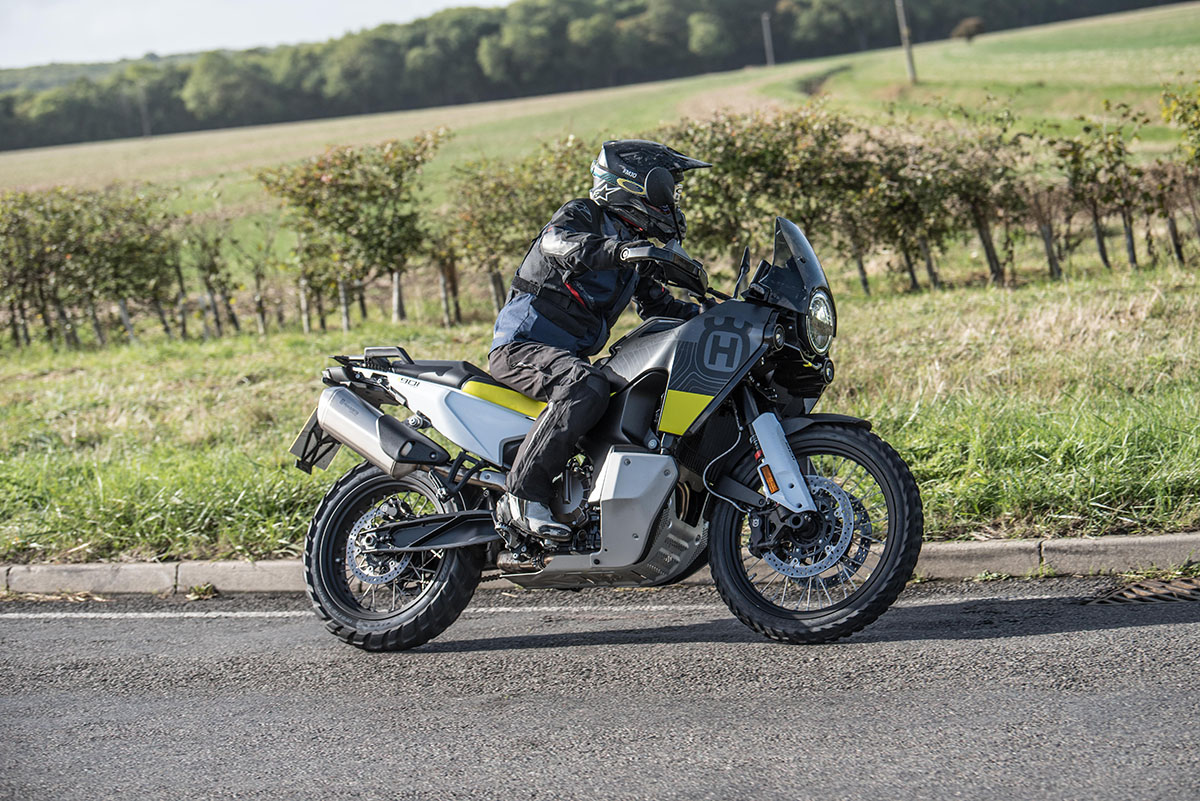 Being a road rider first and foremost, I opted to get some decent mileage in on the Norden before taking it on some trails. Not only does it look absolutely gorgeous in person (I’m a big fan of Husqvarna’s edgy looks across their range) but it’s finished nicely too, with a really intuitive dashboard set-up and a set of switchgears that feel perfectly placed, even with some chunky winter gloves on. Although it sits lower than some its rivals (26mm lower than the 890 Adventure R) it’s still a hefty machine, but I have to say that it’s incredibly well balanced at a standstill or at slow speeds, which is incredibly confidence inspiring if, like me, you’re shorter in the leg.

One of my favourite things about the Norden is that parallel twin engine, as it offers a punchy and exciting thrust every time you open that throttle in Street mode, with what feels like a bucket load of torque on tap, no matter where you’re sitting in the rev range. It’s worth noting that the throttle response is incredibly direct and even a little bit aggressive, but it’s more than manageable considering you’ve got 100bhp at your right wrist. It’s worth noting that the rain mode does soften things off quite considerably too, making the Norden a really gentle beast if the conditions are truly grim. As someone who’s happy doing bigger mileage, I have to say that the cruise control and fuel economy both impressed me, although the one thing I would've liked as standard is an adjustable, or at least slightly bigger screen. It doesn’t quite offer a huge amount in terms of wind protection, but aside from that it's a comfortable beast if you plan on racking up the miles.

In terms of its handling, the Norden really did impress me too. The WP Apex suspension is great and I had no qualms whatsoever with the front end especially, as unlike some big adventure bikes it doesn’t feel vague, but nicely connected. Sure, it's not quite as pin-perfect as the standard 890, but it's far nicer than the Adventure R, although it should be noted that the Norden we tested did come with the optional, and more off-road focussed, Metzeler Karoo rubber, as opposed to the standard Pirelli Scorpion Rally STR tyres.

But that's just half the story; as off-road it really did handle itself well too. Riding mainly on more open, moderate and easy lanes to start with I found that the Norden was responsive in its feedback and it felt well balanced too, giving me a whole host of confidence to throw well over 200kg of bike around with a worry in the world. So much so in fact, that it was more than ample enough to tackle some soggy, grim green lanes and tougher trails too, which was only made easier by how incredible those electronics are in off-road mode, acting as a little angel on your shoulder. If you’re at a high-level on the dirt and are looking to do some truly hardcore and aggressive riding you will undoubtedly run into its limits much easier than I did, but for the majority of us, it delivered exactly what I wanted.

I wasn’t sure if making such a Jack-of-all-trades machine would mean a lack of ability to do both on and off-road riding to a decent standard, but I needn’t have worried. On road, it’s an engaging adventure bike capable of doing everything from fast jaunts to long journeys, with a level of excitement that other machinery can only yearn for. And yes, I know it's not as aggressive or as focussed as some of its off-road rivals, but at my distinctly average level of off-road riding, it did everything I wanted and more. If you want a bit of both? You’re going to love this.