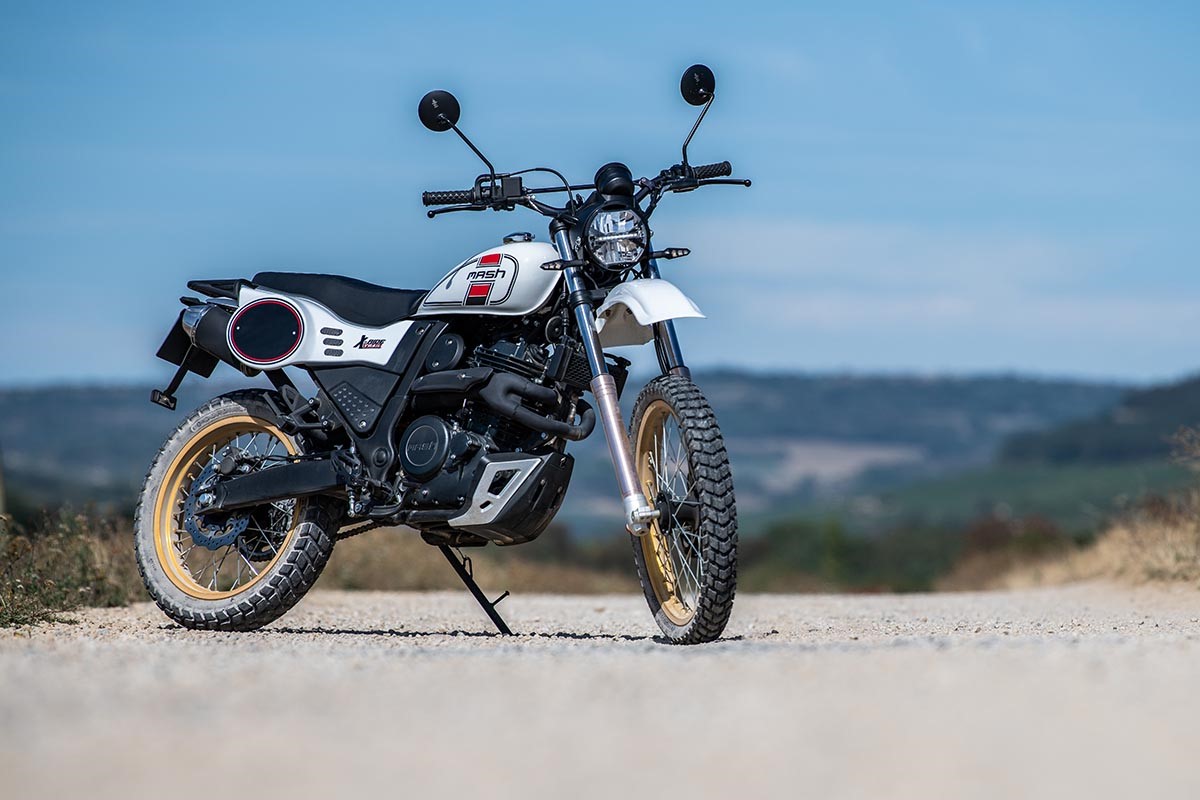 This could be the shortest motorcycle review in history.

With some modern bikes you could almost write a book about the various features and technical innovations, but the Mash X-Ride Trail 650 has none of that. It’s an old school iron horse with an engine based on a 35 year old Honda design and a look that owes an awful lot to Yamaha’s iconic XT500 dirt bike. That’s a good thing and, if the idea of a modern day XT500 floats your boat, read on…

Mash is a French company, developing a range of motorcycles around Chinese built motors, which in turn are based on well proven Japanese tech. The X-Ride 650 has been around for a few years now, but the 2023 line up includes this ‘Trail’ version alongside the standard model – the main difference being a different exhaust and the adoption of a 21” front and 18” rear wheel, instead of 17” front and rear on the standard machine. 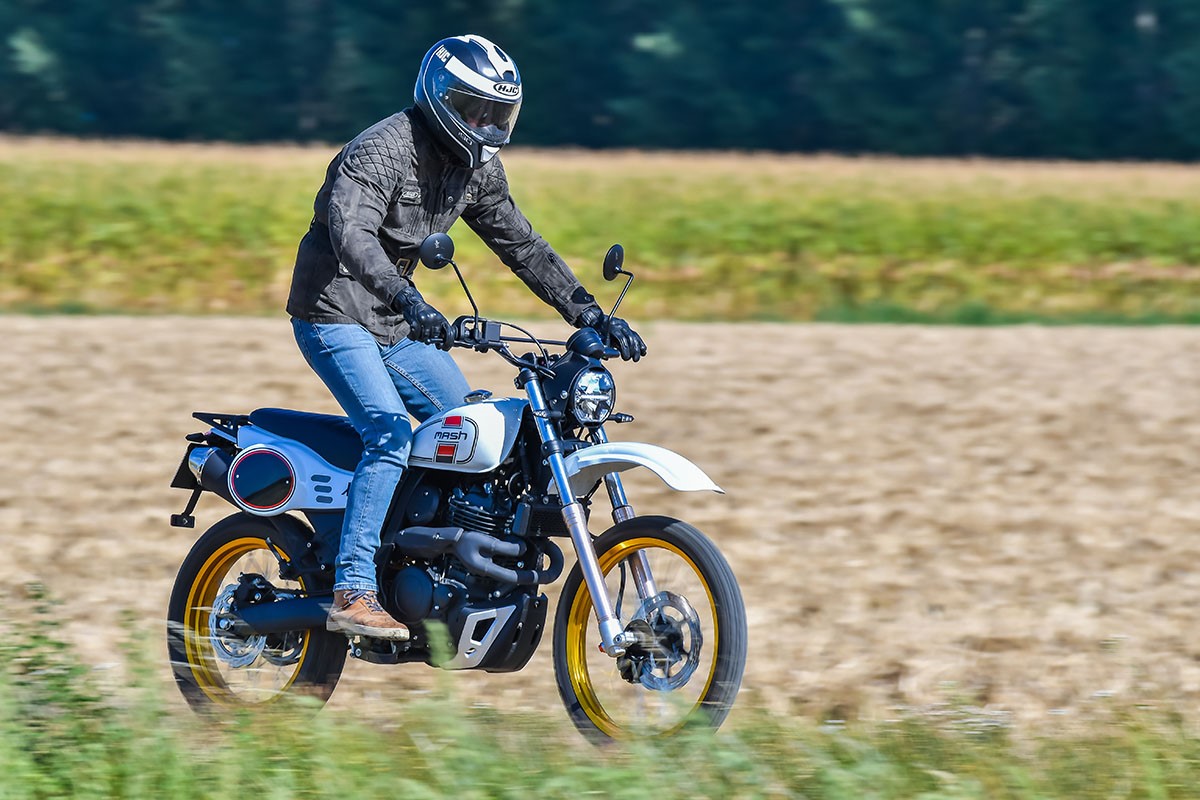 The engine is an air and oil cooled 644cc single with four radial valves, essentially a clone of the old Honda Dominator design. The Dominator engine was hardly at the cutting edge 35 years ago and the processes of putting it through the latest Euro5 emissions means that it’s lost a few ponies over the decades.

With 39bhp on tap, the Mash doesn’t exactly set the world on fire when it comes to performance, but it’s got loads of character in a way that only a big single can. Unlike the old Hondas, the Mash uses electronic fuel injection – an essential modification to reduce the emissions. It’s actually pretty refined, as thumpers go, starting first time on the button and fuelling nicely even when cold.

In many ways the Mash can be likened to an old air-cooled Harley-Davidson. These would get stick from many riders because they stuck with traditional technology, but those who loved them did so for precisely that reason. There is barely a less complicated motorcycle than the Mash X-Ride on sale today, and if you get it then you get it.

The X-Ride has the kind of upright riding position you’d expect from a retro dirt bike, and it is tall. The seat sits at 890mm, 60mm taller than the standard X-Ride, and although the narrow seat makes it reasonably accessible, shorter riders are likely to find themselves up on their tiptoes at the lights. The large bench seat looks good and is comfortable enough, albeit a little on the firm side, while the traditional wide bars provide plenty of leverage to make slow speed manoeuvres a cinch.

The riding experience is let down by the unbranded OE tyres, which fail to inspire much by way of confidence – especially on cold and damp British roads, but it gets some adjustable suspension made by mountain bike specialists Fastace. The tall suspension felt quite firm out the crate, but can be tweaked for rebound and compression through adjusters at the bottom of the fork legs.

At £5599, the Mash is a budget machine and isn’t really dripping with fancy parts. Visually it looks very appealing with a cool paint scheme and gold rimmed spoked wheels. The high level front mudguard, side panels and bench seat all look and feel good, and the squishy handlebar grips are comfortable and cancel out a lot of the vibrations you get from a big single. That said, like pretty much every other big single I’ve ever ridden, the mirrors’ usefulness are impacted by the vibrations at speed. They look great though, as do the LED lights, which are modern but look retro. A rear rack completes the early ‘80s look and is also a practical touch, allowing small packages to be bungeed on. 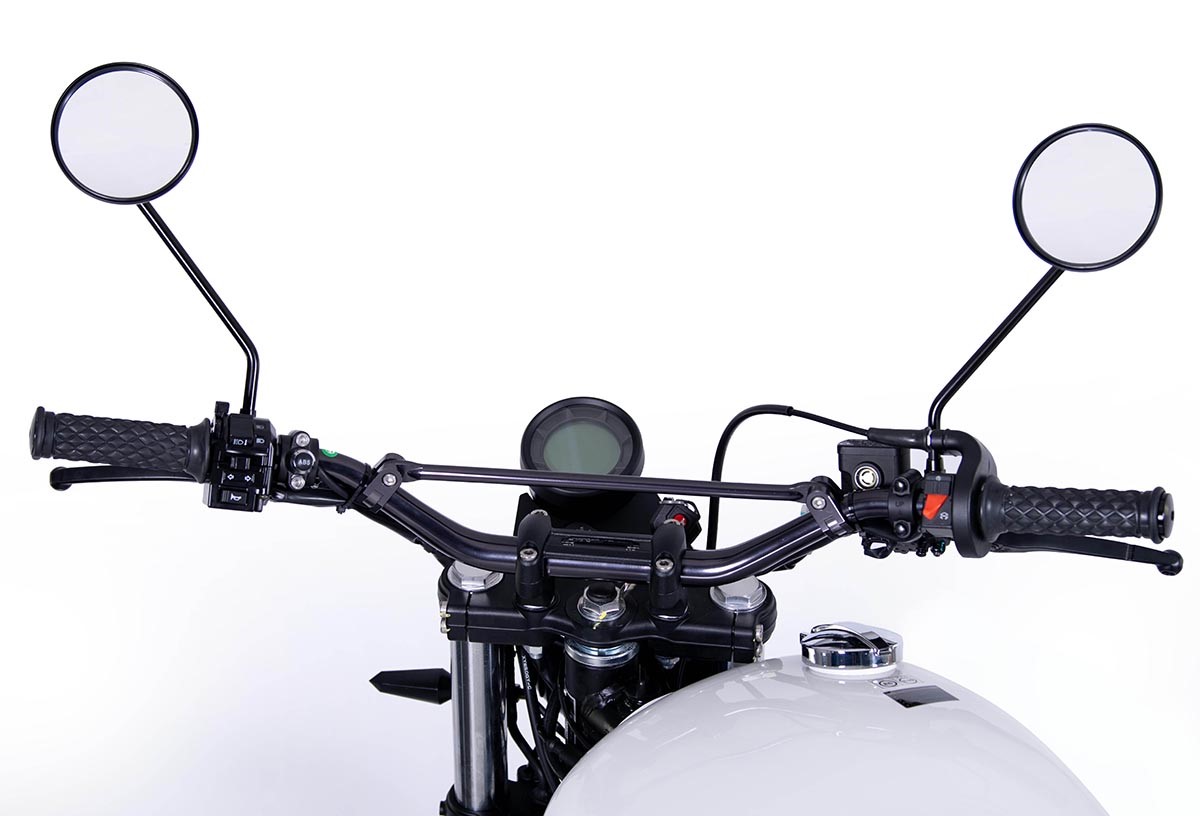 Otherwise, it is simplicity in itself. There are no riding modes, traction control, TFT screens or any of that modern stuff. The small LED speedo fits into a traditional round binnacle, and there’s a well placed USB socket mounted underneath too. The speedo itself has a fuel gauge, clock and rev counter, and it tells you how fast you are going too – what more do you want? There are ABS brakes, which are mandated by law, and they’re basic but adequate, and the ABS can be switched off though a big button on the dashboard. That’s a bonus for riding on trails, although if you want to do serious off-road riding the Mash probably wouldn’t be your weapon of choice. That said, if you owned one you could certainly have a good laugh on the green lanes – after fitting some suitable tyres, of course.

But on the road is where most people will be. That engine is lovely for some lazy pottering around the back roads, or as a characterful commuter. The five speed gearbox is well spaced out, and enhances that laid back feeling. Dual carriageways are definitely not its natural domain, but with a top speed of over 70mph it can cope when needs be. It does get a bit vibey when you rev it, but that’s no different to an old ‘80s single like an XT500 or Dominator anyway, and that upright riding isn’t really suitable for three digit touring anyway. Also, it’s worth noting that the fuel tank only holds 11 litres of unleaded and motorway riding saw the fuel light come on after around 60 miles – albeit when the tank was still one third full.

The Mash X-Ride Trail 650 is certainly a Marmite bike. The best way to enjoy big singles is definitely to relax and enjoy the ride. It’s the last bastion of the analogue motorcycle and if you’re only about riding fast and enjoying the latest technology on offer, this bike is definitely not for you – but then you probably didn’t need us to tell you that, did you?

But if you’ve ridden and appreciated an ‘80s thumper then there’s something quite alluring about the Mash. It’s niche, for sure, but if you love motorcycling broken down into its most basic essence then there’s a lot to like about the Mash. It looks great and that throbbing engine is full of character. To use a cliché, it is what it is. It’s pleasant to bimble around on and so mechanically simple you can carry out your own servicing. That old school engineering is refreshing in today’s world of electronically controlled motorcycles, and the Mash can quite nicely sit in a multibike garage alongside some classics or more day to day rides. It’s a classic off-road style motorbike, without the hassles of classic bike ownership – and that’s got to be a good thing.