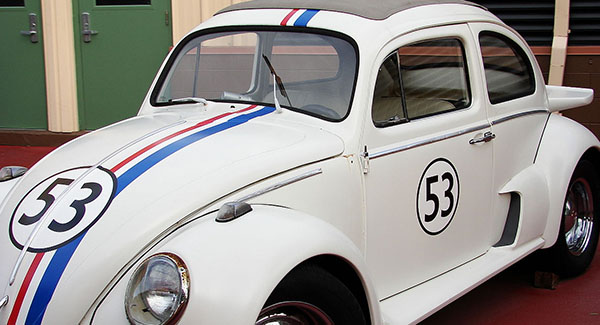 It’s no secret that Volkswagen is one of the most successful automotive manufacturers of all time. With such cars as the Beetle and Hatchback, Volkswagen has a reputation for excellence. VW cars have proven to be popular in film as well. From Footloose, to Back to the Future, there have been a number of VWs that have appeared on the silver screen. Here are some of the most famous.

Arguably the most famous Beetle of all time, Herbie is a car with a mind of its own. He’s capable of driving himself and is distinguished by red, white and blue racing stripes. The number 53 is painted on the front and doors. This classic look lasted until Herbie: Fully Loaded, when the car went through several changes. For example, Herbie took on a street racer look with bright white paint, a whale-tail rear spoiler and wider tyres.

The success of the Herbie franchise increased the popularity of Beetles even more.

1973 Volkswagen Type 2 Van in Back to the Future

The iconic VW Type 2 van was used when a group of Libyans chased Marty McFly and Doc Brown. The van sports a blue and white paint job. It shares the spotlight with the Delorean DMC-12 car and is just as significant.

Kevin Bacon stars in Footloose as Ren McCormack, a teenager with a passion for dancing. During the film he drives a yellow 1972 Volkswagen Beetle with a black stripe across the doors. The car had a rustic quality that fit with the small town life of the film.

Little Miss Sunshine is the story of a girl called Olive who sets out to become a beauty queen in the Little Miss Sunshine pageant. To help her achieve her dream, Olive’s family hop into a yellow VW van for a cross-country trip. The van is as much a character as the rest of the family, transporting them to their destination. According to IMDB, five identical Type 2s were used during filming.

1973 Volkswagen Beetle in The Shining

The opening sequence of The Shining features a yellow VW beetle driving through the mountains to reach the Overlook Hotel. There’s a sense of isolation when comparing the tiny car to the vastness of the mountains. According to director Stanley Kubrick “it was important to establish an ominous mood during Jack’s first drive up to the hotel – the vast isolation and eerie splendour of high mountains, and the narrow, winding roads which would become impassable after heavy snow. In fact, the roads we filmed for the title sequence are closed throughout winter and only negotiable by tracked vehicles.”