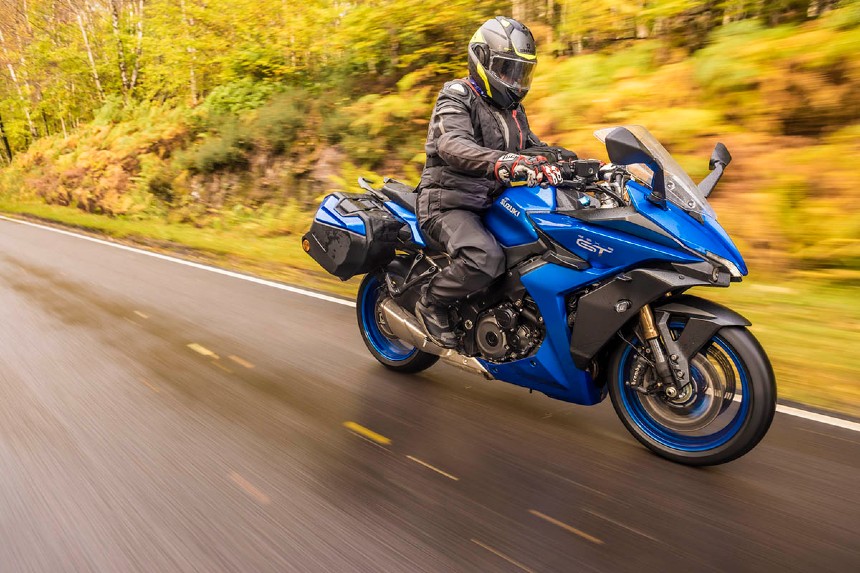 Suzuki joins the growing sports touring revival with its new GSX-S1000GT for 2022. We tried it out for size.

Having been all but wiped out by the popularity of adventure bikes in the past decade or so, the sport tourer is making a bit of a comeback. Buoyed on by the success of the Kawasaki Ninja 1000SX, Yamaha’s Tracer 9 GT and Honda’s new-for-2022 NT1100 join Suzuki in getting in on the act with well-priced all-rounders, designed to be able to commute and tour in equal measure while still offering enough go for a bit of weekend fun.

Several of the recent new Suzukis I’ve ridden have had me come away a little nonplussed. Ok, so bikes like the Katana, V-Strom 1050 and GSX-S1000 have worked well enough, but they’ve all been a bit short of that all-important X-Factor. Luckily the new GT changes that, and I’m optimistic for its future. I think it’s one of the best Suzukis I’ve ridden for years. 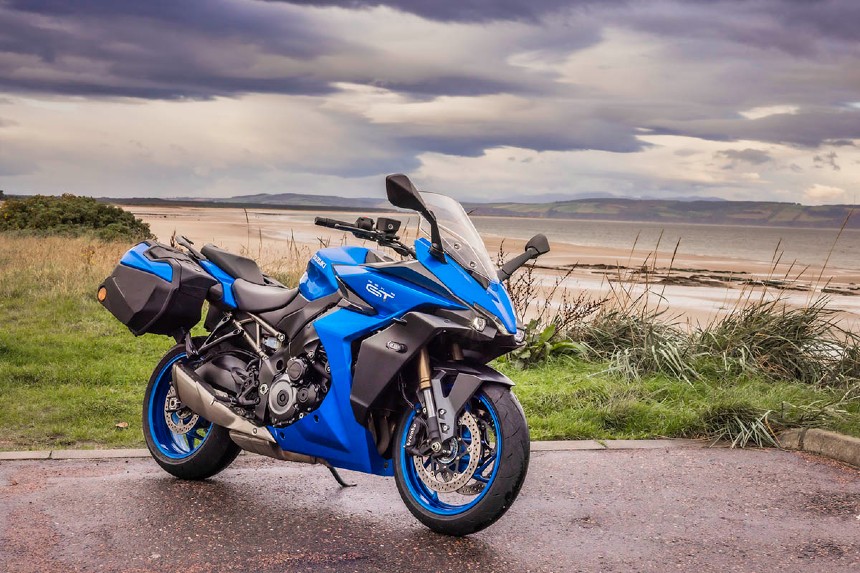 Suzuki invited us to ride the new GSX-S1000GT in Scotland, where we spent 300 miles in the saddle over two days. Like the aforementioned machines, much of the new bike features components we’ve seen introduced many years previously. The engine is the oldest of the lot, with the GSX-R1000K5 derived inline-four motor’s origins dating way back to 2005! With the frame, swingarm, wheels, suspension and brakes all lifted from last year’s GSX-S1000 streetbike, there was a bit of ‘here we go again’ apathy about what might lay in store.

But fear not. Get settled into the plusher seat though, and the encouragement of a potentially brighter overall view begins. Finally the clocks look up to date, with the 6.5” full colour TFT screen displaying tons of data in a contemporary style, with the added bonus of having phone connectivity to boost the info level and functionality even further. Given how long I’d be riding, the GT’s slighter lower footrests, giving a slightly more relaxed riding position, and rubber mounted bars, preventing vibes reaching the rider’s hands, are also welcome. With the size of the head-turning, super stylish fairing and a tallish screen appearing to offer decent protection, I predicted the day’s riding was likely to see me in good physical shape throughout.

And within minutes of getting underway, that good cheer was raised quite a few notches. The ‘antique’ engine is an absolute beauty, worthy of plenty of approval. In fact, I’m prepared to go so far to call it epic. No matter that its design is over 16 years-old, its torque, flexibility, superb manners, smoothness, and overall strength are legendary. It was an icon in the GSX-R superbike all those years ago and for it to still cut it in 2021 is miraculous. My deep affection would grow with each extra mile. 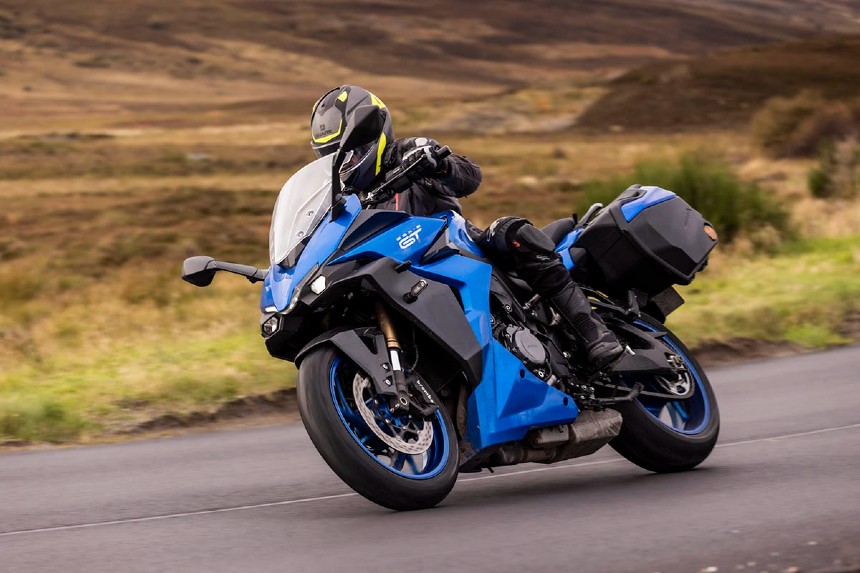 The GT’s not the sort of bike that’s itching to be thrashed. On the contrary, it’s happy to be ridden more gently, even in the most responsive A-setting of the three rider modes available. Scotland delivered what it’s famous for during our test, lots of rain. To be honest, I didn’t mind. I enjoy riding in the wet and think it lets you examine any bike’s behaviour in finer detail. It certainly gives you the chance to discover how friendly and well-balanced it might be, or not. The new sports-tourer’s rider-friendly nature is very apparent, and though its easily adjusted electronics might not be able to match the highest spec of some bikes, thanks to the lack of an IMU, the traction control and ABS systems helped me feel safe throughout.

The luggage might be a little wide to permit easy filtering, but they’re convenient, capacious at 36 litres each, and thankfully waterproof, although sadly they’re only a £999 option; Suzuki defending the decision by saying not all owners want them as standard. They probably have a point, as Kawasaki has a similar arrangement on its good selling 1000SX.

Very cool temperatures brought my first real criticisms of the GT, namely its tyres and brakes. Though fitted with precisely the same OE Dunlop Roadsmart 2s as the GSX-S streetbike, which I found sticky enough to be pushed hard on track in summer, they don’t offer the same adhesion in lower temperatures. They’re not bad but I’d prefer to fit some other more versatile sports touring rubber if the bike was mine. I might want to swap the brake pads too. There’s no doubting there’s plenty of power on offer, with a fair bit of feel as well. But that only comes, like the tyres, when the pads and discs are up to fuller temperatures. 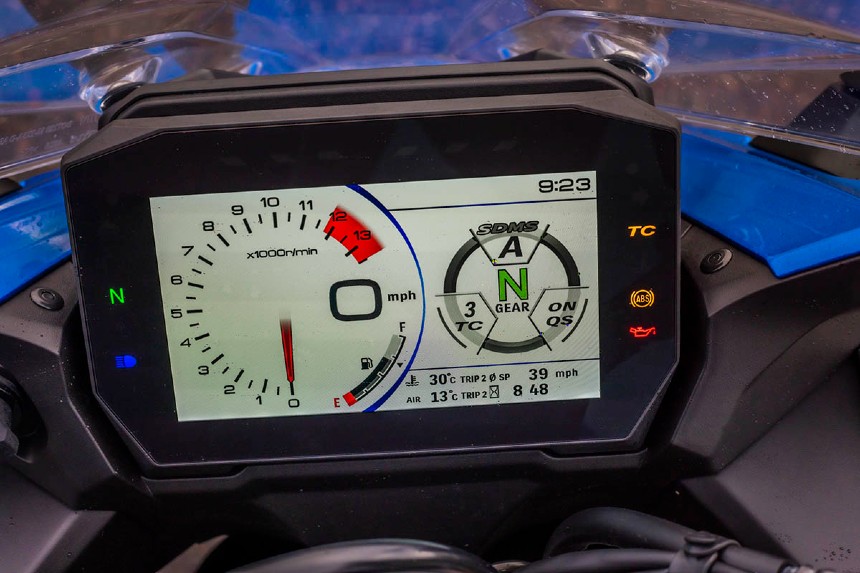 There’s a nice GSX-R style rasp from airbox and exhaust, pleasing the ears when spun harder, while the excellent standard fitment two-way quick-shifter, slick gearbox, and light clutch encourage plenty of action with the left foot and hand.

Drier roads also brought an appreciation of the GT’s steering accuracy and agility in direction changes, with only light effort needed through the wide bars to get it to change line. Helping to smooth out the rougher sections, both forks and shock still give good support when tested by heavier forces delivered by acceleration, braking, or cornering. There’s full adjustment at the front, and choice of preload and rebound settings at the rear, although I never felt the need to fine tune either end during our test.

If I’m honest, I really ended up liking the Suzuki a fair bit more than I expected and I’ve got a sneaky feeling it’s going to be a hit in 2022. The company has made very few purpose-built sports tourers over the years, but I think it’s done a very good job with this one. The GT does what all commendable bikes in this class should do, but has the bonus of possessing an extra portion of excitement in addition. There’s definitely some GSX-R in its DNA, and it’s one of several virtues helping to make it more memorable and stimulating than most recent new Suzuki models.